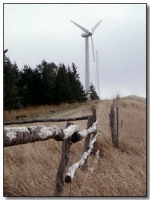 The legislation will create an Office of Renewable Energy within the Division of Community Services at the North Dakota Commerce Department, which will assist in the development of renewable energy within the state and promote energy conservation in both the public and private sectors. “Everyone involved with designing energy legislation this session can be proud today of the work we’ve done to expand renewable energy production in North Dakota,” Hoeven said. “We have now established a comprehensive program to give the renewable energy sector a significant boost in North Dakota.” A range of new energy incentives to benefit the state’s wind industry include: – Creation of a North Dakota Transmission Authority, which will promote new investment in transmission lines in North Dakota. – Allowing the trade of premium renewable energy credits to plants in other states, which should help fund the development of wind energy in North Dakota – Raising the jurisdictional threshold for siting electrical power generation facilities from 50,000 to 100,000 kW, which should reduce the regulatory burden for wind energy companies to site plants in North Dakota. Below the threshold, the company doesn’t require siting approval from the PSC. – Reducing the maximum siting application fee for a power conversion facility or a transmission corridor from $150,000 to $100,000, and to return to the applicant any portion of the fee unspent by the state in the siting process. – A pending provision to reduce the assessed value of a wind turbine electric generation unit from 3 percent to 1.5 percent to promote the commencement of construction on wind facilities prior to July 1, 2006. Incentives for the state’s ethanol industry include: – Continuing appropriation for the Governor’s Counter-cyclical Ethanol Production Incentive, which makes available up to $4.6 million in the next biennium, including $1.35 million for expansion of existing ethanol plants. – Introducing a 20-cent-per-gallon tax incentive for E85 at the pump, which must be passed on to the consumer (incentives are good only up to 1.2 million gallons). – Creating a 30 percent investment tax credit for all investors in ethanol or biodiesel production facilities. Incentives for the state’s biodiesel industry include: – Creating a $1.2 million biodiesel PACE program, which will provide up to $650,000 in interest buy-down for a biodiesel plant, by providing $400,000 combined with $250,000 in regular PACE. – Introducing an income tax credit of 10 percent per year for up to 5 years, or 50 percent of direct costs for biodiesel sales equipment, such as pumps, hoses and tanks purchased by retailers. – Introducing an income tax credit for any fuel supplier that blends biodiesel fuel to the ratio of 5 percent, or B5. The credit equals five cents per gallon of fuel blended. – Creating a sales tax exemption on the sale of new equipment to any facility that will enable the facility to sell diesel fuel containing at least two percent biodiesel fuel. Incentives to promote the use of hydrogen in state include: – Creating a sales tax exemption on hydrogen to power an internal combustion engine or fuel cell. “The legislation we have just signed will create new synergies and new dynamics in North Dakota’s energy markets,” Hoeven said. “Wind and coal, ethanol and coal, biodiesel and oil and gas – we are now putting in place a comprehensive strategy that creates a strong and effective role for all of North Dakota’s diverse energy products.”