Baja California, Mexico — Gamesa, the expansionist Spanish wind-power company, is stepping up its forays into Mexican with hopes to sell as many as 2,000 wind turbines to Baja California. Its plans come at a time when observers expect the windy state bordering Southern California will attract $6bn of wind investments by 2015.

A string of industry heavyweights including Cannon Power, Union Fenosa and Sempra Energy are already pursuing ambitious projects in the region and others are on their way, sources say. The companies hope to export the bulk of future production to the sunny state, which is having trouble meeting its renewable energy targets. 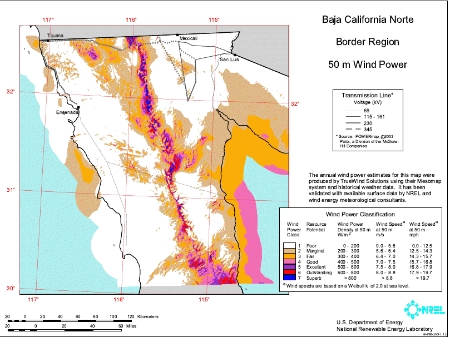 Gamesa’s regional sales director William Robinson says developers are so enthused about Baja’s prospects that the region could attract 5,000 MW of generation capacity by 2017. This will require around 2,000 turbines, which Gamesa hopes to supply from its US factories.

Already, Gamesa has a 10-year contract to sell turbines to Cannon Power, which is on track to build as much as 1,000 MW of wind parks by 2016.

Cannon is just as excited about the region’s wind potential. According to president Gary Hardke, the area stretching 10 miles wide and 80 miles long could lure as much as $6bn from a wide range of wind players in five years.

This is mainly because California’s saturated wind market and difficult permit environment is making it increasingly hard for developers to expand there. In contrast, Baja has a huge untapped wind resource and permits are much easier to procure, observers say.

“There are no wind resources available in California like we have in Baja,” Hardke confirms. “There is a huge corridor along the mountain range that is still untapped.”

Overall, Baja has 10,000 MW (and possibly even 20 GW) of commercially viable wind-power potential, experts say. So far, there are 70 MW in operation but this is about to change as Cannon and several and the other utilities break ground on over 2,000 MW of projects. While Mexico’s grid is expected to consume some of the production, the majority will be exported to California, which has fallen behind in its ambitious green agenda.

Apart from Cannon’s project, Spain’s Union Fenosa and US-based Sempra Energy are developing an 800 MW park while Mexico’s Fuerza Eolica also plans to install 400 MW.
California is working to install as much as 5,000 MW of wind generation by 2015 and as much as 8,000-12,000 MW by 2020, according Nancy Rader, executive director of the American Wind Energy Association (AWEA).

Rader acknowledges some of this capacity could come from Baja California as the projections are based on in-state and out-of-state power stemming from inter-connection grids. If the developers’ predictions are right, the upcoming 5,000 MW slated for Baja would mean California could have nearly 10,000 MW of wind capacity in six years.

But Rader said it’s too early to predict whether that could happen.

While California’s difficult permit environment will make Baja a more attractive production destination, “it’s not quite on the map yet,” she notes, adding that hardly any power purchase agreements have been signed to import its power and that the international transmission network needs to be widened. California is also planning to install 6,000 MW of solar thermal power by 2012-15, which could leave less room for wind permits, depending on whether such targets are met.

Overall, California hopes to meet 33% of its energy demand from renewables in ten years with as much as 12% of this coming from wind.  So far the state has 3,731 MW of installed wind power capacity.

But Hardke says Mexico’s permit process is “a lot more efficient and quicker” than California’s where multiple agencies have “overlapping and contradictory” requirements.

“California’s legislature is working hard to streamline the process and they ought to be applauded for it. Still, the permitting process remains very laborious,” Hardke notes, adding that permit approvals can take years in the US and just months in Mexico.

Individuals can also easily appeal permits in the U.S., while this is in uncommon in Mexico. Mexico doesn’t provide wind-production tax credits like the U.S. but it does grant tax incentives to foreign suppliers including exemptions on equipment imports and schemes to lower a project’s depreciation and amortization costs over its first ten years.

While selling tariffs are not as high as California’s, production costs are significantly lower, making projects just as profitable in Mexico as in the U.S., Hardke says. “When you take into account lower sale, transmission and construction costs, the projects are just as economically viable,” he adds.

Meanwhile, Gamesa is also building a wind park in other windy Mexican region Oaxaca where developers are working to install as much as 2,000 MW.

The company also wants to establish a Mexican manufacturing site in the next 12 months, which could take the form of a wind turbine and or tower factory, company officials confirmed.

Gamesa is also beefing up in Central America. It recently won a contract to sell turbines for Honduras’ 105 MW Cerro de Hula (south of the capital Tegucigalpa) wind park, which the country boasts will the region’s largest. Honduras also plans to build a hydroelectric power plant in Patuca this year as part of other undisclosed projects to diversify its energy matrix.

Neighboring Nicaragua is also jumping into the renewables bandwagon. This week it announced plans to install 600 MW worth of wind, hydroelectric, geothermic an wind energy by 2016.