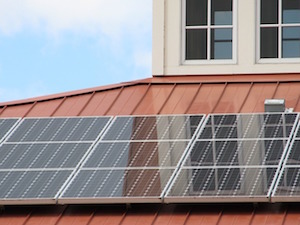 A South African bank has become the go-to funding source for the U.S. rooftop solar industry just two years after entering the market.

Investec Plc arranged $880 million in debt financing for rooftop solar developers and financiers in 2016. That’s more than half of the $1.5 billion bank debt raised last year, according to Bloomberg New Energy Finance.

Financing for rooftop solar is underpinned by thousands of small contracts with consumers. While the debt is tied to strong individual credit scores, banks have favored big solar farms because they generally have contracts with investment-grade utilities. Investec has filled the gap by focusing on the rooftop industry’s unique financing needs, said Ralph Cho, the bank’s co-head of power & infrastructure in the Americas.

“We’re not a plain vanilla solar lender,” the New York-based Cho said in an interview. “We do more complicated deals that sometimes take commodity risk or construction risk.”

The bank was founded in Johannesburg in 1974, and 15 years later was listed on the local stock exchange. It moved into the U.K. in 1992 and listed there a decade later. It focuses today on asset management and wealth management for high net-worth clients, with an emphasis on the U.K., South Africa and Australia.

Investec hired Cho and fellow co-head Michael Pantelogianis in 2013. They worked previously at German bank WestLB, where they helped finance several landmark power and energy deals including the largest U.S. wind farm, the $1.9 billion Shepherds Flat project in Oregon. They also raised about $4 billion for ethanol projects, another energy sector that didn’t get ample attention from banks.

“We felt we could replicate the ethanol template we used back at WestLB for residential solar,” said Pantelogianis. Investec typically puts together a deal to anchor the financing, and raises the rest from “targeted banks active with consumer finance and power-project finance.”

The bank’s first rooftop deal, in 2014, was arranging $195 million in credit facilities for Sunrun Inc., the second-biggest U.S. installer. Investec’s second deal didn’t come for more than a year, another financing for Sunrun. Its clients also include Vivint Solar Inc. and Spruce Finance Inc.

Investec gained market share as rooftop installers and financiers began looking increasingly at bank debt to finance growth. Bankers had initially expected the rooftop industry to turn to the securitization market, where investors are familiar with consumer credit risk and long-term contracts with homeowners.

There have only been a handful of deals for rooftop solar asset-backed securities (ABS). Solar companies have raised $882 million in the ABS market through the end of 2016, including $321 million in the first half of 2016 and none in the second half, according to New Energy Finance.

Investec has “carved a good niche in this space,” said Thomas Plagemann, chief commercial officer at Lehi, Utah-based Vivint Solar. “The Investec guys said, ‘I understand these structures,’ they understand solar, and said, ‘I can get my head around the consumer finance piece.’” Vivint raised $313 million in August through an Investec-led deal.

When Sunrun hired Investec, the idea was that the bank would essentially provide the installer with a credit card, until some of its consumer contracts could be packaged into new securities or medium-term bank loans, Cho said. Now, Investec is providing medium-term debt that competes with the ABS market.

“There’s a little more to understand than just consumer credit,’’ Edward Fenster, chairman at San Francisco-based Sunrun, said in an interview. “Deal execution is an art.”