The Solomon Islands [Renewable Energy World Magazine] Those most in need of new renewable technologies are often least able to raise the finance necessary to fund such development. Now, a new commodities exchange scheme is bringing renewables to the South Pacific using a novel rural payment method. Binu Parthan explains how the scheme works.

Cash, a precious resource in the Solomon Islands, runs through villagers’ hands as quickly as water from the archipelago’s beautiful lagoons. Saving money is virtually unheard of, bank accounts are unusual and borrowing is rare, certainly for individual families.

Under these circumstances, installing new solar power units – viewed as a luxury in even the richest countries – might seem a utopian and far-fetched venture. However, a team of renewable energy developers working for the Pacific Islands Applied Geoscience Commission (SOPAC) and funded by the Renewable Energy and Energy Efficiency Partnership (REEEP), have hatched an unusual scheme that enables these communities to access renewable energy, such as solar, without raising substantial sums of ready cash. The team has developed a unique new financing mechanism that has the potential to be applied across various rural communities, not only in the Solomon Islands.

If the islanders were not able to pay for solar lanterns with cash, reasoned the project developers, why not pay with crops? Bartering is quite commonplace in the region and crops are often exchanged for fish, for instance. Through simple lateral thinking, an innovative microfinance scheme has been invented in which crops are exchanged, not for food, but for another commodity – electricity.

‘The giving of crops is virtually the same as giving cash,’ states Paul Fairbairn, SOPAC’s Community Lifelines Programme manager. Indicating how this new formula dodges weaknesses inherent in previous experiments, Fairbairn adds: ‘Many other similar schemes have failed. For example, when funds were collected at a central point sometimes they were misappropriated.’

Renewable energy is already available on the islands with some micro hydro sources up and running. More is possible due to the abundance of hydro power resources. However, the use of decentralized solar power eliminates two or three hour walks to collect kerosene and allows more time for other, more productive work. Because the technology is installed where the energy is required, there are power distribution savings and more widespread potential.

Villagers make a small deposit on the cost of the system prior to the installation, which is a prerequisite to joining and eligibility for a solar LED lighting system.

To pay for the investment, the local people, most of whom are farmers, plant enough cassava, dalo, banana and other crops as is necessary to make the planned monthly repayments. They take the crops to a cash-for-crops exchange which arranges to repay the banks.

Ideally it is envisaged that the system is paid off within 24 months. Though recipients are encouraged to pay half or full costs upfront through discount incentives.

Purchasers who are not consistent with monthly repayments have their systems removed after two consecutive months (eight weekly payments) of non-repayment. This is in line with the credit sales agreement between the solar entrepreneurs and the purchaser, which evolved after extensive community consultations. 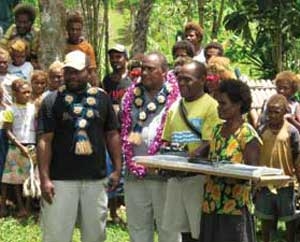 Introducing a foreign system into communities can be challenging, particularly if it is a completely new business. However, this project builds on the existing well-established solar power business of Willies Electrical and Solar Power. Many villagers are familiar with solar power and its advantages, even if they may not be able to afford it. As Melbourne, Australia-based Eva Oberender from REEEP’s Southeast Asia and Pacific Regional Secretariat observes, interweaving the new system with an existing enterprise is more likely to lead to success. ‘By encouraging an entrepreneur to add a renewable energy component to established businesses, this project has the ability to tap into an existing network of customers, making it easier to create the market for renewable energy and energy efficiency in this country,’ she says.

Fairbairn confirms the importance of this feature of the project, saying: ‘The solar entrepreneur has a good solid business going. Hence this is an opportunity to further expand an already successful business – there has been a lot of goodwill provided in supporting this project.’

However, integrating the system is not a straightforward process. While the communities may understand renewable energy benefits, they may not be accustomed to working with commercial business concepts, this stimulates the need to partner with local, ingrained companies which are recognized by the Solomon Islanders.

Oberender explains: ‘It can be difficult to infiltrate some very traditional communities and introduce them to private entrepreneurship.’ But to be successful, the project developers need to go one step further than liaising with local energy experts. ‘It is crucial that the project involves the local community from the very beginning. Besides obvious advantages of community consultations, Pacific communities function in a very traditional sense. Without the involvement and leadership of the villages’ chiefs, the project would not be as successful,’ she says.

While it is a simple idea, the cash-for-crops centre, the hub of this pilot project which affects 35 properties in three villages in the Solomon Islands, has not been tried elsewhere on a major scale. As Fairbairn explains, it has other practical advantages too: ‘The centre’s advantage also comes from the fact that the village producing the crops is also far from the solar sales point. Hence it is a little like using a middleman or a truck to carry goods to a market or auction point.’

As the project finished in January 2009, Fairbairn admitted that solar LED lighting in the islands was still very much at an embryonic stage. The success of the cash crops system needs to be proven across a wider range of inhabitants while the solar units themselves need to be reliable. ‘There is currently no guarantee in regard to the life of the various components – hence in setting up this pilot there also needs to be consideration given to the installer having a number of spare parts that will be available if the lanterns fail during the warranty period,’ he says.

Potential for other communities

The managers involved hope to see the concept expanded not just in the Solomons, but also elsewhere. For the Solomons, this may be more likely given the support of the island authorities during the first phase. The government requested the project for access to better lighting in rural and remote communities as part of its development objectives.

Pun intended, SOPAC believe the seeds for a successful microfinance model have been sown with the use of an existing enterprise in tandem with a less vulnerable payment system. They believe that, if the right combination of businesses are in place – with appropriate financial returns, a robust system with a good reputation, and affordability for the purpose of meeting the rural communities’ needs – then the project should be successful and replicable.

There is confidence that the project can be rolled out and the solar entrepreneur in the Solomon Islands intends to install at least 5000 systems within the next three years, states Fairbairn. But to encourage it to take root, local banks need to engage with the project, which in this example currently co-operates with ANZ Bank in the Solomon Islands. 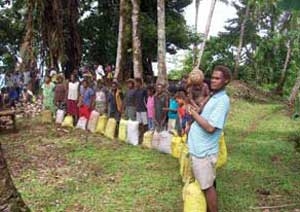 That the project creates jobs is another bonus: local technicians are responsible for the installation of the systems while those who operate the micro energy service company at the heart of the project also receive monthly income for this work.