This boom has been going on for a decade and shows no signs of stopping, the report said. Since 2000 the market for solar photovoltaics (PV) and wind has grown 20-fold, with the price to install solar panels falling by nearly half, and the percentage of the country’s venture capital invested in the space growing from less than 1% to last year’s 23%. 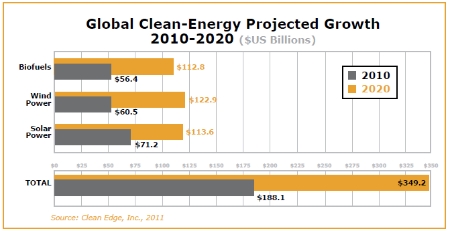 The report’s authors were not beneath a little gloating. They noted that their growth estimates 10 years ago turned out to be very conservative, with solar energy growing three times faster than projected although “many observers, to put it kindly, thought we were being optimistic.”

Projections for the next decade are more of the same. The report expects slightly faster growth for wind energy than for others in the renewable “big three,” led by Chinese investments.

Some of the most promising estimates are in the area of cost parity:

As important as production growth may be, the report says efficiency and technology are proving just as important. The move of lighting from incandescent bulbs to (over the coming decade) LEDs, lower-cost “green building” construction and the discovery of alternatives to “rare earths” will all contribute to reducing fossil demand and raising the market share of renewables.

Tom Konrad of AltEnergyStocks has also seen the report and come up with a list of 10 companies he thinks may benefit from the coming LED boom.

The numbers confirm what many other researchers are finding. Here are a few other headlines from the last week.

Overall, the picture painted by these reports is one of a booming industry.