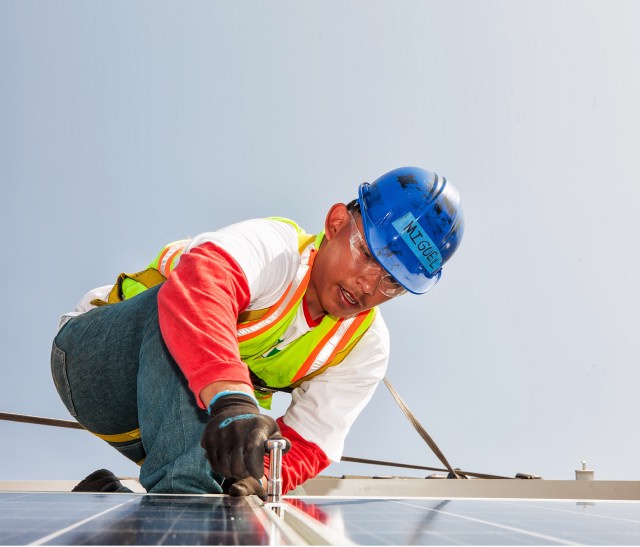 Veterans Day is a time for our nation to recognize and thank all those who have served in the military in peace and war. Moreover, it is a day to reflect and recommit to honoring the service of veterans.

But consider this: Five years ago, the unemployment rate among post-9/11 veterans was 12 percent. About 12 percent of veterans between the ages of 18-34 lived below the poverty level. One in seven homeless people were veterans.

These startling statistics prompted a national call to action in 2011 from the White House and others for employers to hire veterans and their spouses.

Enter Solar Ready Vets, a U.S. Department of Energy program aimed squarely at training veterans to work in the rapidly expanding solar energy industry, in which jobs have grown more than 20 percent in each of the last three years.

One important feature of Solar Ready Vets is an affiliation with the Department of Defense SkillBridge initiative. SkillBridge helps military personnel to pursue civilian job training, employment skills training, apprenticeships, and internships up to six months before they leave the armed forces.

Veteran employment was a priority during my time as the military advisor to North Carolina Governors Bev Perdue and Pat McCrory, and it remains important. As a retired Marine, I know life in the military is very structured, and active-duty families have an extensive support network related to their day-to-day responsibilities and general quality of life. Solar Ready Vets helps mitigate some of the uncertainty about the return to civilian life.

A recent survey of Iraq and Afghanistan veterans found the top three tools to help veterans get jobs are additional education, access to veteran-friendly employers, and professional certification. Solar Ready Vets provides each of these tools for military personnel who are preparing to exit the armed forces, but while they are still receiving military pay and benefits, allowing them to better prepare for transition into the civilian workforce.

Solar Ready Vets recently expanded to Fort Bragg in North Carolina, a state ranked second nationally in solar energy capacity. Last summer, Solar Ready Vets graduated its first class of Fort Bragg soldiers. The class leader, Lieutenant Colonel Frederick Barber, said he had served his nation for 21 years in uniform and was now, like his classmates, looking for his next adventure. He said Solar Ready Vets provided him a new opportunity to serve.

Major General Nick Justice (U.S. Army Ret.) urged the 12 graduates to stay local: “Stay in North Carolina and make us the energy capital of the world.”

Just a month after graduation, six of the 12 graduates received job offers and another three received offers to work when their military service ended. That’s clearly a win for these veterans and the solar industry.

The Fort Bragg program is expected to expand to meet demand. Considering the success of the first class and North Carolina’s booming solar industry, I expect that demand to be high.