Following “moderate” annual growth over the previous five years, unconventional renewable power generation in Chile – from wind, biomass, solar and other renewable energy resources outside of large-scale hydro power – erupted in 2014, Cifra, Chile’s renewable energy agency, recently reported. A total 982 MW of new unconventional renewable power generation capacity came online across the Andean nation in 2014. That was over 300 percent more than the 244 MW installed in 2013.

That kind of growth, and even more importantly over the longer term, Chile’s supportive energy policy framework, have attracted lots of attention, and investment capital, from companies and investment groups across the renewable energy value chain. Spanish energy consulting company Creara, with the support of industry participants and the European Copper Institute, recently released the first PV Grid Parity Monitor to zoom in on solar PV competitiveness in a single country, Chile. 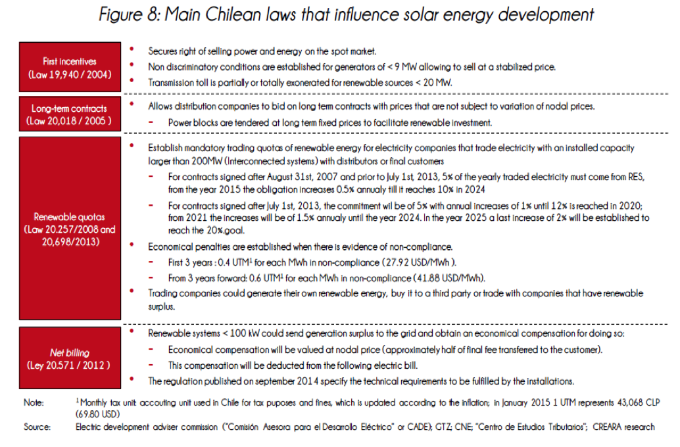 Overall, Chile’s unconventional renewable power generation capacity increased by 2,097 MW last year. While wind power accounted for the single greatest share (836 MW), growth in Chile’s solar PV sector was especially strong. Some 402 MW of solar PV generation capacity came online in Chile in 2014 – a year-over-year growth rate of over 10,000 percent. ERDC reported that another 833 MW more was under construction across the country. Those figures pale in comparison to the 8,149 MW that was approved for construction.

The European Copper Institute’s sixth PV Grid Party Monitor focuses exclusively on the Chilean market. Based on data from 2012-2014, specialist energy consultants Creara assessed competitiveness of PV at the residential, commercial and utility-scale in terms of grid parity. They also review and describe Chilean energy policy as it pertains to solar and renewable within the context of Chile’s overall electricity market.

As the authors explain: “Once PV grid parity is reached, electricity consumers would be better off by self-consuming PV-generated electricity instead of purchasing electricity from the grid. They also review and provide a general description of the current state of renewable energy regulation in Chile.”

Though Creara took different approaches in evaluating PV grid parity in Chile across the three different market sectors, two factors apply across all three: the evolution of generation costs and the market prices for electricity Creara researchers use as references across all three of their sectoral analyses.

Creara summarizes PV competitiveness across all three market segments in the following graph: 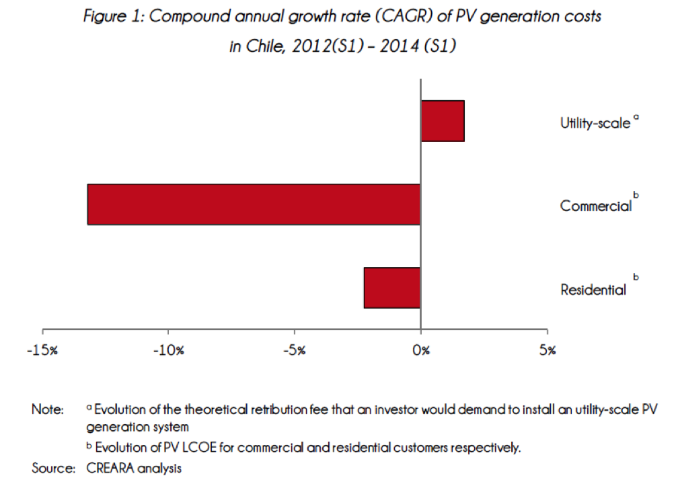 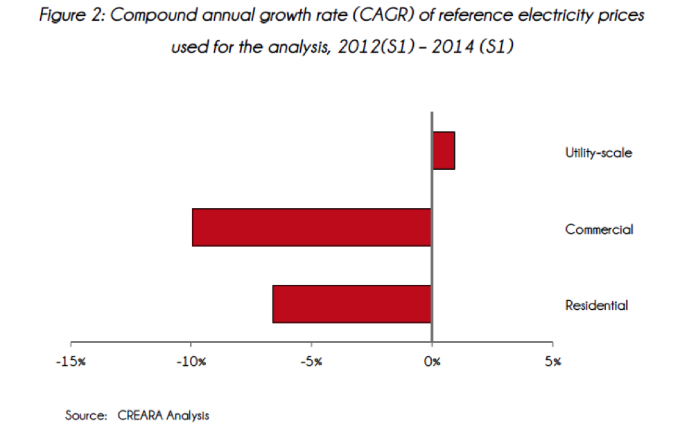 “This fact, combined with a favorable self-consumption regulation, represents an excellent opportunity for greater development of this niche market,” they write.

It’s important to note that Creara’s competitiveness analysis doesn’t take account of any supportive government or other incentives that might enhance, or detract, from PV competitiveness, whether residential, commercial or utility-scale.

Competitiveness of Solar PV in Chile

Turning to the competitiveness of commercial PV generation in Chile, Creara concluded that high installation costs in this sector, along with high discount rates used to calculate return on investment (ROI) and internal rates of return and (IRR) low reference electricity prices leave commercial PV costs on an LCOE basis short of grid parity.

Moving on to utility-scale PV, Creara concludes that grid parity has been reached in certain locations within Chile. “Current high prices in the spot market allow enough room to protect the investor from potential falls of electricity prices, securing their profitability,” according to the report authors.

Summing up its findings, Creara’s Carolina Fondo Roca told REW: “Utility-scale installations have been experiencing explosive growth in Chile in the past two years. Since the [solar PV] electricity market is relatively small, this growth is expected to slow down in the midterm, as the market will not be able to keep on absorbing more installed capacity.”

That shouldn’t prove to be too much of an obstacle with regard to future PV market development in Chile, however, Fondo Roca continued. “On the one hand, residential and commercial installations will play a major role in the mid- and long-term. The technology is already competitive within several areas of the country.

“On the other hand, it is also important to remark that despite the fact that PV competitiveness has not been reached in some segments or spots, the motivation of PV developers can vary from many factors, including environmental needs, green certificate requirements or long-term energy security.”