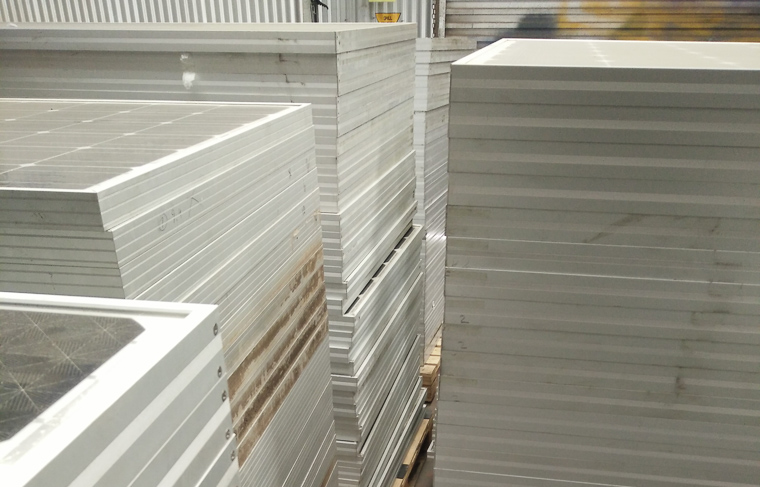 Australia’s only solar panel recycling company is looking to scale up production as the number of broken and end of life systems mounts.

Adelaide-based Reclaim PV has teamed up with major solar panel manufacturers who distribute in Australia and is refining its processes as well as lobbying for panels to be included in recycling regulations.

The company was started by Clive Fleming and David Galloway in 2014 and was spun out of Solar Maintenance and Renewable Technologies (SMART), which they launched in South Australia in 2011.

“We saw the need for the maintenance of solar. We saw a lot of sales happening but not a lot of after sales stuff, there was a vacant space,” Fleming said. “From there we saw a demand for recycling — we were removing a lot of modules from roofs and we were left with a big pile of about 600 panels.”

Recycled panels are not recirculated, they are dismantled using a pyrolysis process developed to remove glues and recover glass, aluminium, solar cells and contacts.

“We’re trying to value add to the cells so they can be reused — not as solar panels — but in new self-powered products,” Fleming said.

Solar panels generally have a 20- or 25-year warranty, but a small percentage of the 23 million solar panels installed in Australia are damaged due to installation or transport handling faults, or develop new faults each year.

Galloway and Fleming are working with the a leading Australian research facility to get more value out of the recycled solar cells and streamline the dismantling process.

They conservatively estimate 100,000 to 150,000 panels a year need replacing in Australia.

“It’s not as simple as finding solar panels that are broken and recycling them, there are undiagnosed systems out there and all these solar installation companies are now turning to servicing and that’s bringing in more diagnoses,” Fleming said. “It’s going to be steady for the next 15 years and then it’s going to ramp up into the millions every year needing to come off the roofs. I think because it’s PV, people want to recycle anyway — people who buy solar panels are generally concerned about the environment.”

The Waste Electrical and Electronic Equipment (WEEE) directive regulates the treatment of electrical and electronic waste at the end of its life cycle in Europe. Solar panels were added to the directive in 2012.

“PV Recycling in Europe have been recycling for seven or eight years, so they’ve brought that awareness to these manufacturers who are operating in Australia as well as Europe,” Fleming said.

Australian CleanTech Managing Director John O’Brien said official protocols around the recycling of PV solar panels would become increasingly important in the coming years as millions of panels came to the end of their useful life.

“There’s a great business opportunity there if government signals that in good time,” he said. “The big providers will need a local smart company to go and pick them up, process them and do good things with them, so certainly it’s going to be huge.”

The Australian Government’s National Television and Computer Recycling Scheme was established in 2011 to provide householders and small businesses with access to industry-funded collection and recycling services for televisions and computers.

The regulations require importers and manufacturers of televisions, computers and computer products to fund and implement recycling of their products.

Galloway said including solar panels in the regulations would be a great benefit.

“We are looking for industry and government support at this point to reach a critical mass so the feedstock is enough to offset the costs,” he said. “It’s a new industry in Australia; the manufacturers see it as a cost, which it is, so we’ve got to work in with that. We’ve got to give them a value added service, which is why SMART is associated with it.”

Galloway said that Reclaim PV is also working with each state government to try and get infrastructure in each state so they can change the e-waste legislation to make it illegal to send PV panels to landfill.

Reclaim PV is refining its processes and hopes to establish collection and dismantling centres across Australia before the end of the year.

The company will also continue to work with Tier One panel suppliers, such as SunPower, Canadian Solar, Suntech, ReneSola and Yingli, with more manufacturers partnering soon.

“It’s industry-led at the moment; they know the problems and they know where it’s headed. It’s just a matter of getting it to the point where it can be facilitated on all fronts,” Galloway said. “We are setting up an industry stewardship, which will then hopefully lead in to a program that’s run by the government and also the legislative changes need to be made in each state as well.”

Galloway said that the company is trying to set it up now so there’s an easy gradient into it, so that when it becomes a “big problem” the infrastructure is there.

“If we don’t and it escalates, we have to look to catch up to a waste problem, which came out of a good green carbon offsetting initiative,” he said.

South Australia leads the nation in the uptake of wind energy and rooftop solar, with renewable sources accounting for more than 30 percent of the electricity generated in the state.

This article was originally published by The Lead Australia under a Creative Commons license. It was edited for style.