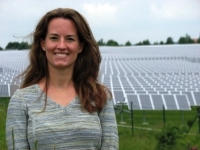 Julia Hamm, Solar Electric Power Association, says that the future of solar power lies in every region of the US. While on a fact-finding mission to Japan, SEPA’s delegation was impressed by how Japan has embraced solar at consumer, manufacturing, and national policy levels.

(December 3, 2010) — When most people think “solar electric power” — even people in our industry — they tend to think “sunbelt.” California, Arizona, Texas, Florida: that’s where the future of solar lies in the United States. It’s one of the solar industry’s biggest myths, one that the Solar Electric Power Association (SEPA) works every day to refute, says Julia Hamm, SEPA.

The reality in the United States is that solar electric power has a foothold in every region of the country. To cite just two examples, Public Service Electric & Gas Company in New Jersey and Public Service Company of Colorado are two of the top ten utilities in terms of installed solar megawatts, according to SEPA’s 2009 Utility Solar Rankings.

Around the world, many countries not typically thought of as sunny or tropical are also investing heavily in solar electric power. In July, I led a delegation of utility leaders on a fact-finding mission to Japan. The trip included 18 utility executives and managers, and we traveled around the Tokyo area for three days of meeting with representatives from Japanese utilities, government agencies, research organizations and solar companies. We also toured facilities in central Japan, before wrapping up the trip in Kyoto.

Japan may be the Land of the Rising Sun, but Tokyo experiences more cloudy days than sunny days and most of the country experiences a two-month rainy season. Unlike the United States, Japan’s climate and geography do not lend themselves well to renewable energy generation from wind or hydropower. So to meet its renewable energy goals, Japan has embraced solar at the consumer, manufacturing and national policy levels. We came away impressed with the country’s commitment.

While the United States and Japan are about on par in terms of solar capacity installed, we can learn a lot from our number one ally in the Pacific. On November 18, SEPA published a full report that summarizes our findings. From that report, here are some initial takeaways that have emerged from observation made by members of the delegation:

Japan leads the United States in thinking about and addressing the great issues associated with a national power grid that relies on a large percentage of electricity generated by intermittent resources. Because renewables provide just a small percentage of electric power production today, the existing system — built to support large, central station power plants that supply immense amounts of electricity to wide swaths of territory — has been able to handle the load. That will change as we begin to approach 20 or 30 or 40%, and the time to start planning for that future is right now.

This is the third fact-finding mission that SEPA has sponsored, following similar trips to Germany and Spain. It won’t be the last. In fact, we have already planned our trip to Italy in 2011 to learn from the solar industry in that country. Perhaps the most important lesson I learned in Japan is the importance of the cooperation and coordination – not just among different stakeholders here in the United States but also among different countries. We have a lot to learn from each other.

Julia Hamm  has served as the Executive Director of the Solar Electric Power Association (SEPA) since January 2004. She is one of Photovoltaics World’s Champion Advocates of Solar

This article was originally published at www.RenewableEnergyWorld.com and is reprinted here with permission.