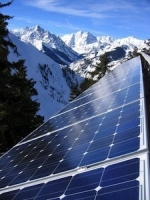 Boston, United States [RenewableEnergyWorld.com] As the books close on what was a turbulent 2009 for the solar industry, Lux Research said that the solar market will soon see the lopsided supply and demand that characterized much of the last year return to equilibrium. According to the new report Solar’s Shakeout: Europe Loses Leadership as China Rises,” strong demand growth in Asia and the U.S. will push the market to 9.3 GW in 2010, hitting a dollar value of US $39 billion.

Building from there, continuing price reductions for all types of solar technology are expected to open new markets and help the solar industry reach $77 billion in revenue and 26.4 GW in capacity by 2015.

A large portion of the growth is expected to come from China, which in the last few years has become large manufacturer of solar modules and materials, but not yet a large buyer of them. Lux said it expects China to be the world’s largest solar market in 2015.

The report underscores, however, that the renewed balance between supply and demand will arrive only after a wave of company failures and lower utilization rates.

“We found that solar’s short-term pain will enable it to exceed growth expectations over the very long-term,” said Ted Sullivan, a senior analyst for Lux Research, and the report’s lead author. “The volume of solar installations will grow at a 23% annual rate from 2010 to 2015, but revenue will grow by just 14%, as prices fall due to remaining over-capacity. While current subsidies in China and elsewhere will help soak up some of that capacity, there will be widespread company failures throughout the value chain first.”

Among the key findings are that capacity remains well above demand — signaling violent changes ahead.

Lux expects the supply and demand curves to move abruptly together over the next few years due to company failures. Demand will also increase in producing regions such as China, prompted by government subsidies and other factors.

Low-cost x-Si technologies will continue to dominate the marketplace, but thin-film and CSP will gain market share.

Lux said that as financing begins to return to solar in 2010, crystalline silicon players will continue to use low price as a weapon against new technologies that don’t share its “bankability” or scale. However, new technologies such as CSP, CIGS, and even HCPV technologies are expected to gain at the margins.

The biggest take away from the report is that solar adoption will be a multi-decade story. Lux said that solar will wildly beat its expectations in the long-term. When it comes down to deploying solar the industry will rely on an energy and construction business model rather than a consumer-oriented one. As a result the report said that solar’s adoption will rely in large part on replacement cycles for residential and commercial roofs and for natural gas power plants.