Imagine a crop that can be harvested daily on the most barren desert and arid land, with no fertilizer or tillage, and that produces no harmful emissions. Imagine an energy source so bountiful that it can provide many times more energy than we could ever expect to need or use. Imagine that an hour’s worth of sunlight bathing the planet holds far more energy than humans worldwide could consume in a year. You don’t have to imagine it — it’s real and it’s here. Solar energy is an abundant enormous resource that is readily available to all countries throughout the world, and all the space above the earth. It is clean, no waste comes from it, and once a system is in place, it’s “free.”

I firmly believe that to meet all its energy needs, India should diversify its energy mix by accelerating the use of all forms of renewable energy technologies (including PV, thermal solar, wind power, biomass, biogas and hydro) and more proactively promote energy efficiency.  However, in this article, I will only focus on the solar farming potential in India.  You can read my previous paper on “How Concentrated Solar Power (CSP) Technology Can Meet India’s Future Power Needs.”

What is Solar Farming?

On a solar farm, large amounts of power are generated from sunlight. Since solar energy is collected from a wide area, it is important to view the process as “farming” to “harvest” renewable energy from the sun. Solar farming is an opportunity for those in the agricultural sector to view solar energy as a “replacement harvest” and create cleaner forms of energy by transforming vacant or even underused land into farms that produce electrical energy. Having a solar energy system would allow you to produce your own electricity.  Additionally you could sell some of your electricity to your neighbors, local businesses or even the local utility company.

Solar energy provides a new kind of experience to farmers in growing their crops. New commercial solar technologies enable farmers to capture solar energy to produce electricity, heat and hot water to enrich their farms, and energy independence to farmers.

How to Implement Solar Farming

Some governments are providing huge grants or subsidies to fund community solar farm projects as part of their energy programs. Solar farming can help advance India’s use of renewable energy and help assure achievement of economic development goals. To successfully implement solar farming requires feed-in tariffs. This allows farmers to invest with the security of 20- to 25-year government grants. The energy from these farms is purchased directly by utilities, which often sign 10- to 20-year energy purchase contracts with solar farm owners, thereby securing low-cost energy for the end user.

Solar farms will also play a vital role in reducing greenhouse gas emissions that contribute to global warming. By installing solar farm equipment, owners will also considerably boost the value of their property.

The Future of Solar Farming in Modern India

India is blessed with a vast solar energy potential. About 5,000 trillion kWh of solar energy is incident over India every year. Each day most parts of the country receive 4-7 kWh of solar energy per square meter. India’s deserts and farmland are the sunniest in the world, and thus suitable for large-scale power production. The Indian government should embrace favorable tax structures and consider providing financial resources to fund projects to put up community solar farms as part of their energy development programs. India can become the Saudi Arabia of clean solar energy.

Solar electricity could also shift about 90 percent of daily trip mileage from gasoline to electricity by encouraging increased use of plug-in hybrid cars. For drivers in India this means that the cost per mile could be reduced by one-fourth (in today’s prices).

A decline in solar panel prices over the last two years also has contributed to exponential increases in solar deployment worldwide and lower project costs. A new technology that also holds promise is CPV. First brought to commercial operation in 2008, CPV uses a concentrating optical system that focuses a large area of sunlight onto the individual photovoltaic cells. This feature makes CPV panels two to three times more efficient (approximately 40 percent) at converting sunlight to electricity as compared to silicon-based PV (15 to 20 percent) and thin films (9 to 13 percent).

Major cost reductions will be realized through mass manufacturing. The steep increase in system efficiency, combined with decreases in manufacturing costs could levelize the cost of energy for CPV at around $0.10/kWh by 2015. Various incentives by central and state governments, including tax credits and feed-in tariffs, can further reduce the cost. Cost reductions are so dramatic that Bloomberg recently reported solar energy could soon rival coal. The cost has become so competitive during peak times in Japan and California that the U.S. Department of Energy’s SunShot goal of $1 per watt for large projects by 2017 may happen a lot sooner.

In my opinion, all new energy production in India could be from renewable sources by 2030 and all existing generation could be converted to renewable energy by 2050, if deployment is backed by the right public policies.

Harvesting solar power from space through orbiting solar farms sounds extremely interesting.  The concept of solar panels beaming down energy from space has long been thought as too costly and difficult. Japanese researchers at the Institute for Laser Technology in Osaka have produced up to 180 watts of laser power from sunlight. Scientists in Hokkaido have completed tests of a power transmission system designed to send energy in microwave form to Earth.

Japan has already started working toward its goal by developing a technology for a 1-gigawatt solar farm, which would include four square kilometers of solar panels stationed 36,000 kilometers above the earth’s surface. The energy that will be produced by the solar farm would be enough to supply power to nearly 400,000 average Japanese homes.

California’s next source of renewable power could be an orbiting set of solar panels, high above the equator that would beam electricity back to earth via a receiving station in Fresno County.  Sometime before 2016, Solaren Corp. hopes to launch the world’s first orbiting solar farm to provide a steady flow of electricity day and night. Receivers on the ground would take the energy — transmitted through a beam of electromagnetic waves — and feed it into California’s power grid. If the project becomes reality, Pacific Gas and Electric Co. has agreed to buy power from the company.

Solar energy represents a bright spot on India’s economic front. If India makes a massive switch from coal, oil, natural gas and nuclear power plants to solar and other renewable sources, it is possible that 100 percent of India’s electricity could be from renewable energy by 2050. Solar energy would require the creation of a vast region of photovoltaic cells in the southwest and other parts of the country that could operate at night as well as during the day. Excess daytime energy can be stored in various forms such as molten or liquid salt (a mixture of sodium nitrate and potassium nitrate), compressed air, pumped hydro, hydrogen, battery storage, etc., which would be used as an energy source during nighttime hours.

Solar energy will be competitive with coal as improved and efficient solar cells, CPV and CSP enter the market. I predict that solar farming advancements and growth would empower India’s rural economies and companies will move their operations from urban areas to rural areas due to cheaper land and labor within the solar belt. 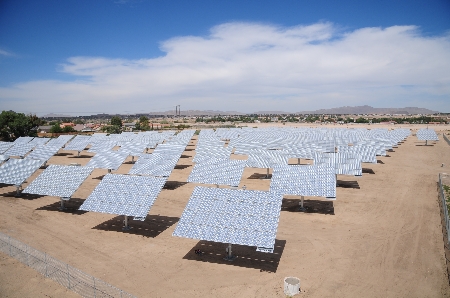 Solar farming is a renewable source of energy and the greenest form of commercial energy.  Solar energy has become the leading alternative to the costly and eco disasters associated with fossil fuels. I urge the government of India to accelerate the country’s solar energy expansion plans and policies by implementing government subsidies for residential solar power through renewable energy rebates and feed-in tariffs. Solar farming is a great concept for an efficient use of barren land and the ideal way to develop large utility scale solar energy farms to meet India’s economic development goals.

Solar energy is a game-changing prospect for India. The nation must accelerate and encourage the domestic development of renewable energy now. It is a question of whether we have the societal and political will to achieve this goal to eliminate our wasteful spending and dependence on foreign sources of energy. The Indian government should provide favorable government policies to ease the permitting process and to provide start-up capital to promote the growth of solar energy. State and central governments should provide initiatives and other support in order to increase solar power plant capacity. India could potentially increase grid-connected solar power generation capacity to over 200,000 MW by 2030, if adequate resources and incentives are provided. Solar energy is a win-win situation for India and the environment, and has the potential to power India’s economy, create millions of new jobs and change the face of India as a green nation.