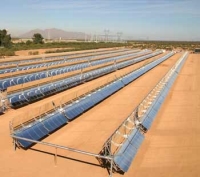 Red Rock, Arizona [RenewableEnergyAccess.com] This weekend in the Arizona desert, 30 miles north of Tucson, the first Concentrating Solar Power (CSP) trough-style energy facility to be constructed in nearly two decades will officially go online and begin delivering power to the U.S. grid. The rows of gleaming mirrored troughs that power a one-megawatt (MW) generator represent a new phase for solar energy in Arizona and the broader U.S.

While currently a rarity among commercial-scale power plants, the technology is becoming increasingly cost competitive and is a perfect match for the growing energy demands of the American Southwest. The major players in the project are Solargenix, now a subsidiary of Spain’s Acciona Group, as the overall system designer and integrator; Germany’s Schott provided the solar receivers, which are the key component of transferring the sun’s energy into useable heat; Ormat, which provided the generator; and Arizona Public Service Company (APS), the state’s dominant energy utility, which purchased the USD$ 6.1 million turnkey project and its electrical output equivalent to the needs of more than 200 average homes. Named after the ubiquitous cactus that dots the nearby landscape, the Saguaro Solar Power Plant is among a series of similar CSP trough-style projects led by Solargenix Energy, a specialist in this type of power plant. Solargenix Energy is currently building a much larger 64 MW solar thermal project of similar design outside Las Vegas, Nevada (see related story at link below). While the Nevada project will be the largest of its type installed in the world in nearly two decades, the smaller Saguaro project clinches the distinction of being the first new trough-style CSP plant to deliver power to the U.S. electric grid since 1988. CSP power plants are gaining increasing attention and notoriety because they appear to offer the best chance of all solar technologies to achieve cost parity with traditional power plants such as natural gas plants. They’re still more expensive, by a factor of around 2 to 1, but the fact they don’t rely on an increasingly expensive input like natural gas has the renewable energy industry and the wider power industry paying close attention to their progress. This is especially the case in the Southwest where this technology is especially well-suited. A recently bolstered state policy requiring utilities like APS to source 15 percent of their energy by 2025 was a sure catalyst but not the entire reason for the project, said Scott Canada, the APS utility’s construction manager for the project. APS has historically been one of the more progressive utilities in the country with respect to exploring renewable energy, and particularly solar photovoltaic (PV) power and concentrated solar PV power. Even with the renewable energy mandate, strengthened only a month ago, Canada says APS has been interested in exploring this technology as a real solution to increasing their commercial generation capacity. “No one has done solar trough in quite some time,” Canada said. “We wanted to take a first step that we could handle appetite-wise, we were really looking for something we could handle in our budget. It was kind of taking a risk but it proved out a lot of technology advances and cost reductions. And it was part of looking at ‘how do we get solar thermal’ in the world again.” Canada also noticed strong interest among APS employees, and surprisingly not just from those on the solar PV and renewable energy side that he expected. “This is really interesting because we gained a lot of interest from the power plant side of the company,” Canada said. “The people who understand the steam cycle found this much more satisfying than PV. They see a potential that it can get close to cost competitive, and they start seeing that this can fit into their business model.” This attention among the traditional thermal sector employees is largely because this power plant has more in common with coal or natural gas power plants than it does with solar PV technologies. Quite simply, instead of burning a finite commodity like natural gas or coal to power a generator, these plants concentrate the sun’s energy to do the job. The plant features roughly 14 acres, or 100,000 square feet of parabolic-trough shaped mirrors — like a long-mirrored half-pipe — that stands more than 15 feet tall. These are aligned in six rows, each more than 1,200 feet long that track the sun from sunrise to sunset, focusing and concentrating the sun’s energy by a factor of 70 onto a fluid-filled vacuum tube. The vacuum tube contains a heat transfer fluid, in this case food-grade mineral oil, which is heated up to 600 degrees F.

In a closed-loop system, the heated oil runs through a tank of liquid pentane, which turns to gas and spins an Organic Rankine Cycle Power Block, typically used in geothermal and biomass applications. The block allows the plant to produce more power at lower temperatures. This is the first time a CSP trough-style power plant has been matched to a Rankine Cycle power block. Similar projects above 50 MW, such as the aforementioned Nevada project, can operate on the more efficient steam cycle process where water is used instead of pentane. One drawback, however, to the larger process is that it requires a full-time plant operator, whereas the Saguaro Solar Power Plant at APS is fully automated and unstaffed. Independent renewable energy industry consultant, Scott Sklar of the Stella Group, says this technology has a major future in the American southwest. “This solar plant exemplifies that thousands of megawatts of solar electric power can be brought on in the southwestern United States without polluting land or water, without competing for water resources, and meeting baseload electric power requirements of a dynamically growing region of the United States,” said Sklar. Solargenix President John Myles sees the technology going much farther than just the American Southwest. “There has been great interest in this project from developing countries where remote power plants in the 1 to 5 megawatt range are desperately needed,” Myles said. “This technology supports the United Nations’ model of development of rural areas in regions which have abundant solar resources but lack an adequate transmission grid.”