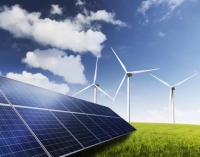 In addition, 14 new “units” of solar came on line for a total of 294-MW of capacity, led by MidAmerican Renewables LLC’s 250-MW Topaz Solar Farms expansion in California.

So, for the ninth time in the past eleven months, renewable energy sources (i.e., biomass, geothermal, hydropower, solar, wind) accounted for the majority of new U.S. electrical generation brought into service. Natural gas took the lead in the other two months (April and August).

Renewable energy sources now account for 16.44 percent of total installed operating generating capacity in the U.S.: water – 8.43 percent, wind – 5.42 percent, biomass – 1.38 percent, solar – 0.88 percent, and geothermal steam – 0.33 percent.  Renewable energy capacity is now greater than that of nuclear (9.22 percent) and oil (3.97 percent) combined. Note that generating capacity is not the same as actual generation. Generation per MW of capacity (i.e., capacity factor) for renewables is often lower than that for fossil fuels and nuclear power. According to the most recent data (i.e., as of September 2014) provided by the U.S. Energy Information Administration, actual net electrical generation from renewable energy sources now totals a bit more than 13 percent of total U.S. electrical production; however, this figure almost certainly understates renewables’ actual contribution significantly because EIA does not fully account for all electricity generated by distributed renewable energy sources (e.g., rooftop solar).

With only one month left in 2014, it has become a horse race between natural gas and renewable energy as to which will dominate new electrical generation for the year. Regardless of the winner, it is apparent that coal, oil, and nuclear will be left behind in the dust.