Fiji’s tropical environment, alongside recent commitments by the Fiji Electricity Authority (FEA), opens the door to renewable energy sources like small hydropower, which can be supplemented with wind energy and biomass from sugar cane waste. The country’s largest hydropower project – the 83 MW Monasavu Hydro Scheme – was commissioned in 1983 and provides half of the nation’s power.

Today, another small hydropower project is underway to help Fiji further drive toward energy independence. Once commissioned, the Nadarivatu Renewable Energy Project, located on the remote headwaters of the Sigatoka River on the main island of Vitu Levu, will generate an additional 42 MW of power, enough to meet another 20 percent of the island’s electricity needs by using the country’s rivers.

The Nadarivatu project, initiated in 2009 and expected to be completed as REW goes to press, has faced various design and construction challenges. However, the Fiji Electrical Authority (FEA), along with engineering firm MWH Global, have collaborated to help ensure the project’s completion.

In 2002, the Fiji Electricity Authority retained MWH Global to provide initial feasibility studies and geotechnical investigations for the Nadarivatu project. The company was officially hired on as the project’s owner-engineer in 2009, with Sinohydro Corporation of China in charge of executing the construction of the project under an Engineer-Procure-Construct (EPC) contract. Together, the project team embarked on a 36-month construction schedule, with an anticipated completion date of the end of 2011. The estimated US$150 million project has employed 465 workers, 150 of whom are Fijian. 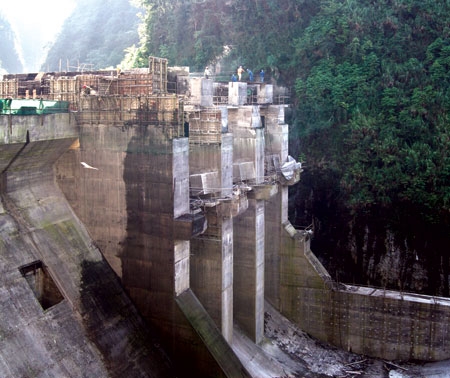 Throughout the duration of the project, the project team has needed to develop solutions to overcome the challenges associated with project location, financing and delivery.

Access and transportation have been the most challenging problems to overcome, mainly because of the site’s remote location in the central highlands of Viti Levu — an area known for its steep and rugged terrain. Prior to the start of construction, significant transportation upgrades were required to reach the project site. The route to Nadarivatu involves a 70 km trek on a single lane road from the main international airport and port city prior to reaching the closest town of Tavua, followed by a 40 km winding and narrow gravel road to the construction site. The road from Tavua, which also sees an elevation gain of 900 metres, was one of the biggest access upgrades, which included both widening and improving the road.

An additional 15 km of new roads was built within the project site. This included a ‘zig-zag’ road formation, requiring some equipment deliveries to be reversed down mid-way by transport operators over a length of 500 metres. Regular maintenance to the gravel roads has also been required due to heavy rainfall and tropical conditions. 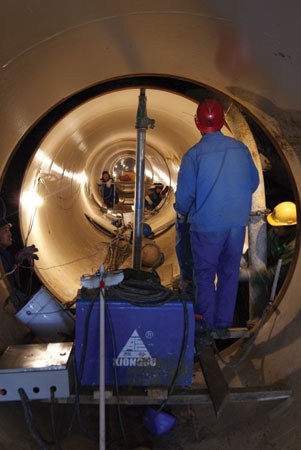 The remote nature of many power projects, including Nadarivatu, includes complex terrain and long travel times between power stations. There are also numerous times each year when sites cannot be accessed because of tropical weather conditions, which also increase the risk of plant outages. With a low system capacity and a complex electricity system, operating between the various schemes and energy sources is inherently challenging.

With these limitations, losing communication or control of any individual project would be a significant blow to the energy grid. As a result, the Nadarivatu project was designed to be remotely controlled from the National Control Centre near Lautoka City, located about 120 km (by road) from the plant. This is to prevent a loss of power should an issue occur and affect the entire island’s power capacity, potentially causing blackouts at major tourist areas. Remote access also allows the plant to be more efficiently managed, and it enabled the project to become a reality despite its remote location.

Finding ways to finance Nadarivatu has been another major challenge. Since the development of the Monavasu Hydro Scheme in the 1980s, the FEA has utilised Independent Power Producers (IPPs) to provide the capital investment to augment its renewable energy programme. IPPs involve a partnership between private companies and the FEA to provide up-front capital for projects. Once the projects are completed, power is sold back to the FEA over a fixed-term contract at an agreed-upon price.

While the Nadarivatu project originated as an IPP, the FEA also sought funding via the World Bank. In anticipation of World Bank funding, the project was structured according to a requirement of the Bank, the EPC project delivery mechanism, which is a delivery method similar to the Design-Build delivery system often used in the US. Unfortunately, the World Bank was unable to back the Nadarivatu project due to its funding regulations, and the project ended up being funded through a balance of FEA capital, commercial loans and an additional loan from the Chinese Development Bank, which was arranged by Sinohydro.

While financing didn’t materialise from the World Bank, the project still proceeded under an EPC contract. However, EPC proved to be a difficult model to successfully implement for this project, primarily because it required that the design delivery be executed by the contractor, Sinohydro, which typically only performs procurement and construction.

The international team also struggled to develop designs based on western standards. However, this was overcome by MWH taking on the role of owner’s engineer, representing the FEA and providing technical due diligence across the project, including design. 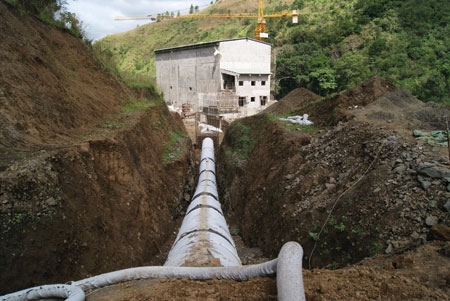 There were six full-time engineers on site, in addition to 20 FEA engineers and technicians. MWH was responsible for managing the budget and schedule, upsizing the team and supervisory responsibilities to ensure that quality assurance, health, safety and project standards were met. The on-site team was also supported by a design review team of engineers in New Zealand, who offered extensive design review and guidance.

While there were challenges, the scope and location of the Nadarivatu project is naturally conducive to limited environmental and community impacts. Although Vitu Levu is home to most of the island nation’s residents, communities are sparsely populated. In fact, the closest population centre to the Nadarivatu project is located 18 km downstream, which means it will experience little impact from changes in river levels. Areas of vegetation are expected to experience high re-growth thanks to the tropical environment. With the small impoundment area, the site’s footprint is also relatively small.

In addition, small hydropower developments like Nadarivatu are also responsible for bringing power to communities for the first time. For Nadarivatu this includes the Buya Buya, a village near the site that had no power or road access prior to project construction.

A detailed Environmental Impact Assessment conducted during the early stages of the project led to an Environmental Approval plan that outlined all environmental risks and mitigation measures. As a result, the team worked to address and resolve all potential health and safety issues, including managing the workers’ camp for proper water supply, health and hygiene, and extensive monitoring, reporting, evaluation and review.

As the FEA strives to become energy independent through the development of sustainable resources, hydropower is at the forefront of this potential. In addition to the Nadarivatu project, there are several other hydro projects in the pipeline including an upstream augmentation to Nadarivatu that would provide an additional 30 MW of power and an additional 8 MW to the Monasavu scheme. Existing hydropower projects in Fiji also include the 6-MW Wainakisou Power Station, which is scheduled for an upgrade that would increase both the head and storage capacity, and the 3-MW Nagado Power Station. Planned projects will add more than 25 percent additional energy generation from hydropower to the country’s energy grid.