Sunrise, Florida — From a nondescript office building in suburban Sunrise, a small business is helping bring renewable energy to the Caribbean and Africa, including a solar-panel factory recently opened in Ethiopia. 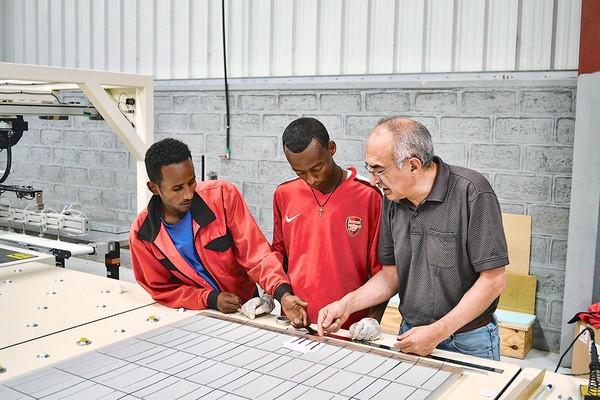 He recognized that the high cost of electricity — or a lack of reliable energy — in many developing nations offered great potential for solar power, which has been dropping dramatically in price.

A factory making industrial pipes in Jamaica became one of SKYei’s first customers and had solar panels installed on its roof. The U.S. Export-Import Bank provided some financing.

Next, SKYei helped an Ethiopian firm set up a $5 million factory to assemble solar panels for use in that landlocked African nation. The Florida Export Financing Corp. gave funds for the deal.

Now, even bigger projects are on tap. McLean wants to set up a network of solar-energy stores in the Caribbean islands. The centers would use trained local contractors to do smaller home installations in each nation, and SKYei would send staff from Florida for larger, commercial ventures.

SKYei also is working to develop hydroelectricity from waterfalls on a river in an area of Tanzania where most residents have no electricity. That project could cost more than $300 million.

“For a businessman, renewable energy in Africa is the frontier,” said McLean from his modest office off Nob Hill Road and Oakland Park Boulevard in Sunrise.

SKYei runs a lean operation. It billed about $4 million last year, working with only a handful of employees in Sunrise. It contracts personnel for projects as needed, said McLean.

Opportunities for energy projects in developing countries are huge, according to energy specialists.

The United Nations and World Bank have ambitious plans to bring electricity to the 1.2 billion people that lack it by 2030. That includes doubling the share of the world’s energy produced from renewable sources — especially water power — to 36 percent. Some energy may come at first from a few solar panels on police stations and other community centers, according to the Sustainable Energy for All plan.

“If you have no electricity at all, getting enough for a few lights and to charge a cellphone is better than nothing,” said Chris Neal, a spokesman at the World Bank in Washington, D.C.

“You can’t end poverty without ending energy poverty,” said Neal in explaining the plan that will cost tens of billions of dollars yearly. “And the private sector has be involved for there to be a lasting solution.”

In other areas with electricity, such as the Caribbean, opportunities abound to cut energy costs. In Puerto Rico, for example, electricity costs about 21 cents per kilowatt-hour, more than double the U.S. average. That explains why the island recently mandated that 12 percent of its energy come from renewable energy sources by 2015 and 15 percent by 2020.

“The Caribbean is one of the few places in the world where the economics of renewables make sense with no subsidy whatever,” said Matthew Perks, executive director of the Caribbean Renewable Energy Forum, a group that organizes an annual conference and other events on renewable energy in the area.

Still, hurdles abound to turn the potential of renewables into business, specialists warned.

Many markets lack legislation to allow new energy projects to sell the electricity they generate back into the country’s power grid. And existing utilities often reject such laws to keep their monopolies. Plus, financing can be tough to obtain for renewable ventures in less developed markets, specialists said.

McLean is optimistic that SKYei can find financial partners to help not only his firm but the people and economies of underserved areas where SKYei operates.

“What chance do schoolchildren have if they don’t have access to electricity and to computers?,” said McLean. “It’s part of our social responsibility.”

This article was originally published in the South Florida Sun Sentinel and was republished with permission.