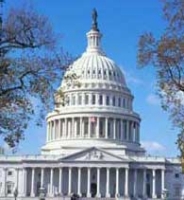 Washington, D.C. [RenewableEnergyAccess.com] High expectations and disappointments have characterized early action on energy legislation. Last month, the U.S. Senate produced an energy bill that includes no tax title — and, therefore, no production tax credit extension — and that has no renewable portfolio standard (RPS). In fact, Senate advocates of renewable energy found themselves in a procedural morass that did not even allow for a vote on the RPS issue.

Meanwhile, action [June 28] in the U.S. House of Representatives Committee on Energy and Commerce resulted in minimal legislation focusing largely on appliance efficiency standards and provisions to promote ethanol use. Proposals for an RPS were considered beyond the scope of the legislation and were therefore not offered at Committee.

It is, however, expected that a major floor vote will occur this month on the RPS issue. As explained below, significant action on both issues is imminent.

“We are still very much in the game on both the PTC extension and enactment of a renewable portfolio standard, but we have to win some crucially important votes in the coming weeks,” said AWEA Senior Director of Government and Public Affairs Greg Wetstone.

RPS vote coming as early as mid-July
With the U.S. Senate last week having approved a limited energy policy bill without a renewable portfolio standard (RPS), attention on the federal RPS issue shifted to the House of Representatives, where the issue likely will come up for a floor vote as early as mid-July.

The RPS will likely come on an amendment offered by Tom Udall (D-N.M.) and Todd Platts (R-Pa.), who previously had introduced the leading House RPS bill, H.R. 969. House leadership will announce very soon whether and when the RPS amendment will be considered.

“This is the moment of truth-right now, in July,” said AWEA Senior Director of Government and Public Affairs Greg Wetstone. “We have to win this vote if we are to get an RPS passed this year. AWEA members need to take action in the coming days and let their representatives in Washington know how important an RPS is to America and to the renewable energy industry.”

PTC legislation: devil is in the details
Activity on an extension of the renewable energy production tax credit (PTC) heated up last week as the wind energy industry worked to make any such extension both full value and long term.

Significantly, both the House and Senate have PTC extensions included in tax packages emerging from the key tax-writing committees, although there remain important issues that still need to be addressed in both the House and Senate language to ensure the tax credit retains its full value. Retaining full value is particularly important in the face of substantially increased project costs.

On June 22 the House Ways & Means Committee approved a tax package containing a four-year PTC extension. The bill, however, includes a new complex financial cap that the American Wind Energy Association (AWEA) opposes because it would create financial uncertainty and cause far fewer wind projects to get built.

In contrast to the current PTC, the proposed House version would penalize projects with the highest capacity factors. The bill’s next step is to go to the floor of the full House.

As AWEA continues to work for a full value and long-term PTC, Senators Max Baucus (D-Mont.) and Charles Grassley (R-Iowa) played a leadership role on the issue, championing the importance of clean, renewable energy to the nation. On the House side, leaders on the PTC issue include Charles Rangel (D-N.Y.) and Earl Pomeroy (D-N.D.).

AWEA urges its members to contact their Members of Congress and urge them to support RPS legislation.

This article first appeared in the June 29 edition of Wind Energy Weekly, and was reprinted with permission from AWEA.