It’s been a busy six weeks since I last updated readers on the news events driving my Ten Clean Energy Stocks for 2013 and six alternative picks. I looked into the performance of the portfolio as a whole at the start of the month, along with some comments about the four renewable energy developers. I thought at the time we might be seeing a bottom for these beleaguered stocks, but if I was right, we have yet to see the upturn. Nevertheless, the fundamental factors I discussed are still in place.

I’ve updated my regular chart of stock performance with intraday prices on October 15th to reflect the two weeks of changes since the performance update, and you can see it below. 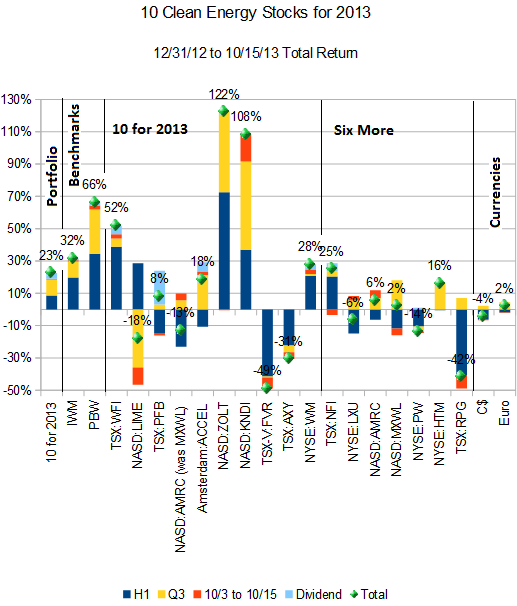 From a couple reader comments, I realize that not everyone understands how to read these charts, which are designed more for the compact display of a lot of information than for easy readability.  You will see bars above and/or below the axis for each stock, with different colors representing each time period or dividends for the year to date.  The total performance of the stock is the sum of the bars above the line, minus the bars below the line, and is represented by the green diamond “Total” and also labeled with the percentage gain or loss since the end of last year.

All stock movements mentioned below refer to the six weeks since the last update on August 30th to intrad day prices on October 15th.  During that period my benchmarks IWM and PBW advanced 9 percent and 28 percent, respectively.

Utility demand-side management contractor Lime Energy completed a seven-to-one reverse split and issuance of preferred stock necessary to maintain its NASDAQ listing.  With the additional $2.5 million in cash from the sale of convertible preferred shares, Lime should have enough cash to see it to profitability late this year or early next.

The company continues to be awarded significant contracts, such as the $22 million direct install contract from National Grid (NYSE:NGG) announced on September 20th.

Lime fell 22 percent for the period, after adjusting for the reverse split.  The preferred dividend payments are payable in additional preferred shares at the company’s option at a rate of 12.5 percent per annum, and are convertible into common shares at a post-split conversion price of $3.87, a 17 percent premium to the current price of $3.23.

Until I see some more financial statements for this much changed company, I’ll have trouble valuing it, but the replacement of most of its outstanding debt with preferred shares on which the dividends are payable with equity clears the way for Lime to achieve profitability in the next couple quarters.  I have not yet, but am seriously considering increasing my position.

The company is down 18 percent for the year.

Navigant research recently published a study of the US Energy Service Company (ESCO) market, which predicts strong year-over year growth in 2014, and 7.7 percent compound annual growth from 2013 to 2020.  This fits well with my belief that Ameresco is temporarily undervalued because of a weak ESCO market in 2012 and early 2013 resulting from the end of the 2009 stimulus.

Strong growth in the ESCO market should also help Hannon Armstrong Sustainable Infrastructure (NYSE:HASI), which arranges financing for and invests in ESCO projects. I expect the dividend to ramp up to over 8 percent over the next three quarters (based on the current stock price of $11.33) and the stock to appreciate as it does.

Bicycle manufacturer and distributor Accell Group gained 7 percent for the period and 18 percent for the year to date.  The company continues to reorganize its Dutch operations to better match costs to a sluggish local bicycle market.

Carbon fiber manufacturer Zoltek rose 38 percent for the period and 122 percent year to date after announcing an agreement with Japanese carbon fiber maker Toray Industries, Inc. (OTC:TRYIF) to purchase the company for $16.75 per share.

There was some speculation in September which temporarily caused the stock to shoot up over $19 on rumors of a $22 bid from Mitsubishi Heavy Industries. I thought the rumored price was much too high given that the group which had forced Zoltek to put itself up for sale, Quinparo Partners, had only been discussing making an offer “in the low teens,” so I sold some $17.50 calls which I expect to expire worthless.

Chinese EV and off road vehicle manufacturer Kandi Technologies climbed 88 percent for a total gain of 108 percent for the year on the renewal of Chinese EV subsidies in September.  I had re-purchased a trading stake in the $4 range which I sold in the low $7 range shortly after the subsidies were announced.  As the stock continued to climb into the $9 range, I sold some $10 calls, which I expect to hold until they expire in December.  Kandi is currently trading at $7.91.

Transit bus maker New Flyer lost 2 percent for the period and is up 25 percent for the year.  The company is integrating the parts businesses acquired from Orion and NABI, and expectsstrong growth as transit customers refurbish rapidly aging fleets.

This evening (Oct 15th) New Flyer announced its new orders and backlog for the third quarter.  Deliveries increased 49 percent year on year to 577 equivalent units (EU) (articulated buses count for two EUs) while adding significantly to its backlong with firm orders and options for a net 1,931 EUs, after the expiration of unexercised options.

Chemicals and Climate control conglomerate LSB Industries advanced 9 percent for the period but is down 6 percent for the year.  The company had temporarily poor earnings in the first two quarters because of repairs and upgrades at two of its chemical plants, although its climate control business was strong.  I expect insurance recoveries and better capacity utilization will lead to much stronger results in Q3 and Q4, as well as next year.

Ultracapacitor maker Maxwell Technologies briefly rallied in September when analysts at Piper Jaffray got confused by the announcement of subsidies for Plug-in Hybrid (PHEV) buses in China (to which Maxwell has insignificant exposure,) and mistook them for the expected subsidies for hybrid (HEV) buses.  Since PHEVs are much more expensive than HEVs, the subsidies were much larger than the Piper Jaffray analysts expected, and they raised their price target from $8 to $13.50, only to drop it back to $8 the next day when they realized their mistake.

Readers of my blog were not fooled, but many traders were, and the stock shot up over $10 before Piper Jaffray reversed their mistake.

It is very hard to predict Chinese policy, but the fact that the expected HEV subsidies have not yet been announced should be worrying to Maxwell investors.  These subsidies were first expected months ago.  China’s stated policy for the EV subsidies was to drive the development of new technology, as opposed to subsidizing the roll-out of established technology.  It’s all about reading tea-leaves, but I’m beginning to think there is a real chance that subsidies for hybrid buses may not be renewed at all.

If they are renewed, the lack of subsidies in the third quarter will mean that Maxwell’s earnings (to be announced next week) are likely to be even worse than I thought a couple months ago, and the lack of subsidy renewal is now eating into fourth quarter earnings as well.  I’ve increased my short position based on this reasoning.

Railroad and solar Real Estate Investment Trust Power REIT received some subtle but positive results in their ongoing civil case to foreclose on their railroad lease with Norfolk Southern Corporation (NYSE:NSC) and its sub-lessee Wheeling and Lake Erie (WLE).  A new judge has replaced the previous judge in the civil action.  In his first ruling, this judge dismissed NSC and WLE’s attempts to get much of the evidence excluded from the case in a long ruling detailing many flaws in their argument where a single-line ruling would have been sufficient.  I believe that the judge was sending them a message not to delay the case with frivolous arguments.  They seem to have gotten the memo, and refrained from another possible motion which had little chance of success, but would have delayed the case by 2-3 months.

Power REIT advanced 4 percent for the period but is down 14 percent year to date.