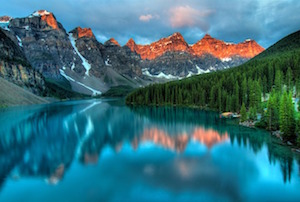 Being an environmental journalist at this point in history can be a bit, well, depressing. It often means bringing negative stories to light: stories about government failing to balance development with environmental protection, or about companies getting away with harmful practices, or about Indigenous peoples’ rights being set aside in the name of progress.

But it’s not all bad news out there.

And DeSmog Canada wants to celebrate those people and organizations that go out of their way to do development right — those that build their plans around meaningful consultation with Indigenous peoples, minimize environmental harms even at a cost to their business and raise the bar for their industries.

We’ve gathered a list of some of the projects we want to fist-bump this year. We’re not suggesting they’re perfect; any large extractive project comes with an environmental cost. But these are projects that rise above the rest in their efforts to minimize that cost.

High on a hillside above the rusting diesel tanks of Rivers Inlet, a new project is coming to life that will render them obsolete. A run-of-river hydro plant is going to displace most of the community’s diesel use starting in the new year, bringing clean and renewable energy to a remote corner of the province.

But it’s not just the technology that puts this project on our list. This indigenous-led project was planned from the beginning with the local wildlife in mind. The entire system is above the highest point salmon reach in that stream, meaning spawning habitat is not affected.

The road was built in consultation with grizzly expert Megan Adams, who recommended a winding road with lots of escape routes to minimize human-bear contact. And throughout the project’s planning and construction, Wuikinuxv elders and community members were involved and employed by the proponent, the Barkley Project Group.

Fish farming has been one of the hot-button issues on the West Coast for more than a decade. First Nations, environmental groups and other concerned residents are resisting the industry, citing fears over the farms’ effects on wild fish stocks. Specifically, open-pen farms are regarded as being dangerous for their ability to pass diseases to wild fish.

One way around that problem is to isolate the fish in land-based tanks, preventing contact between the farmed Atlantic salmon and their wild Pacific cousins — and that’s exactly the approach taken by the ‘Namgis First Nation-owned Kuterra.

The farm even makes use of geothermal energy to heat the tanks. It’s an expensive way to farm fish, more suited to raising smolts than adult fish, and the company has been hard pressed to turn a profit thus far. But as a way to minimize the known and potential harms of fish farming, this is one way to shake up an industry in need of new ideas.

Even with electric vehicles poised to define commuting in the next decade, it still seems ambitious to imagine that the heavy machinery of a mine would be next. But Goldcorp is aiming to electrify an entire mine with its new Borden Gold project southwest of Timmins, Ontario. It wants the underground mine to be all-electric by 2021 — a Canadian first.

The mine will use an electricity and battery-powered underground fleet, which is expected to eliminate all emissions associated with moving ore and waste rock. Bonus: with less diesel fumes kicking around, the Borden Mine will require 50 percent less ventilation than a regular underground mine.

While mining for gold is not essential, mining for other minerals is important for a renewable energy economy and Borden will hopefully set an example for others.

Over the decades, the site of Teck’s (formerly Cominco’s) Sullivan Mine in Kimberley, B.C., hosted a steel mill, fertilizer plant and tailings ponds, rendering the area tree-less for the foreseeable future. What to do with an elevated, south-facing slope that could never again see natural shade? Why, build B.C.’s largest solar farm, of course.

With land and capital contributions from Teck, the Province of B.C. Innovative Clean Energy Fund and a $2 million loan to the City of Kimberley approved by 76 percent of voters, Kimberley’s SunMine project was a no-brainer.

When it started generating electricity in 2015, it became the first solar project in B.C. to sell power directly into BC Hydro’s power grid.

At peak operation, SunMine powers an estimated 200 Kimberley homes, and can generate nearly $250,000 annually in revenue to help repay the initial loan, cover operating costs and, hopefully, expand the project in the future.

If managed properly, forests can provide sustainable income for a community while not sacrificing their ecological values. It’s a delicate balance, but one that’s being tried out on Cortes Island, near Campbell River, B.C.

In 2011, the island’s First Nation and non-First Nation communities came together to co-manage their forests for their mutual benefit. Together, they control licences that make up about a third of the island, sharing the proceeds equally between the Klahoose First Nation and the Cortes Community Forest Co-operative.

In contrast to a normal corporate forestry operation, the partnership’s values voluntarily include preservation of the forest ecosystem, the development of recreational trails and protecting biodiversity and aesthetic values — and all the money it makes remains in the community. Even some of the logs stay on the island; the partnership reports that most of the local construction and carpentry companies are making use of its wood.

The town of Valemount, B.C., is sitting on an endless supply of heat and power — and it’s in the final stages of doing something about it. The town has been working on a plan for years that would allow it to first develop a hot spring, then develop a community geothermal plant to meet the town’s existing energy needs and, eventually, use that energy and heat for other uses as well, like heating a greenhouse, brewing beer or melting ice on the streets.

“It has the potential for being a really ticketable showcase to show the world what can be done with geothermal,” owner of the local Three Ranges brewery Michael Lewis told DeSmog Canada in 2016.

So far, the project’s proponent, Borealis Geopower, has secured rights to develop geothermal in Valemount but has yet to receive drilling permits. Exploratory drilling is the next step Borealis will take to identify just how hot the geothermal potential is beneath the town. But if Valemount’s local hot spots are any indication, there’s likely a wealth of clean, sustainable and cheap energy just below the surface.