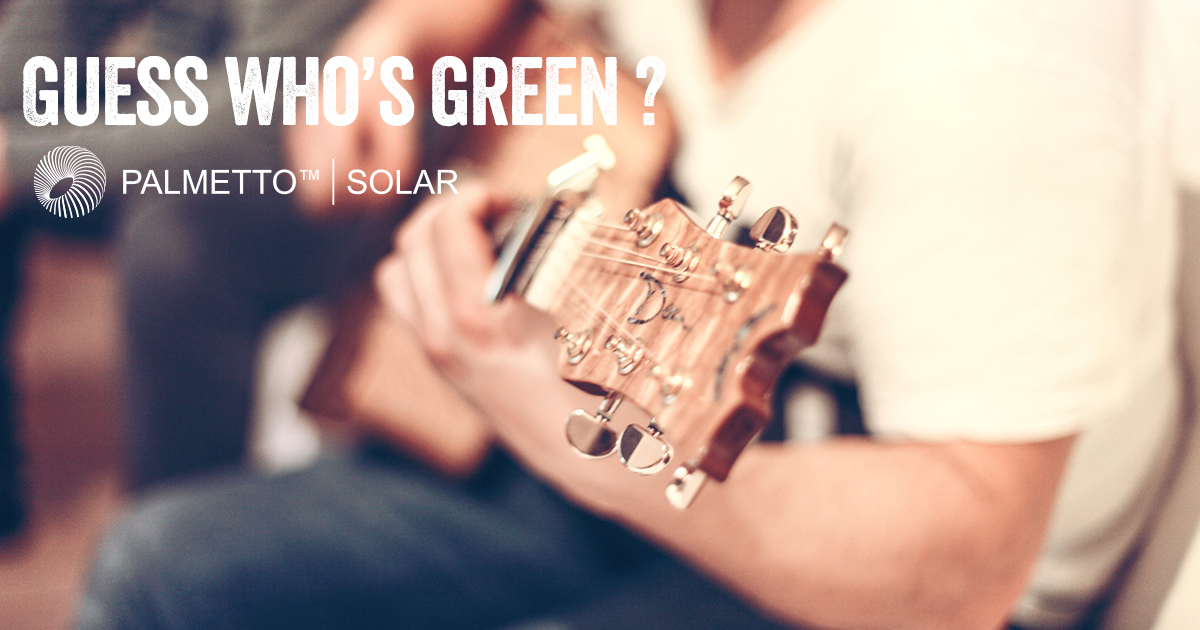 One of the major benefits of going solar is that it is an environmentally-friendly way to power one’s home. The 21st century has witnessed a huge rising all over the world by public figures and activists that are pushing for eco-friendly and energy efficient ways to source power that is less hazardous to our planet. Actors, singers, political figures and celebrities alike have used the public stage to voice their concerns about the state of the environment, and to encourage others to participate in “green living” and using renewable energy sources.

The following list of musical artists consists of famous singers who have used their fame for a good cause. These individuals have made significant contributions, established non-profit organizations, and have publicly supported the movement towards renewable and solar energy solutions.

South African native, Dave Matthews, is one of the most well-known musicians across the world. He uses his fame and popularity to actively raise awareness about pollution, environmentally hazardous material, and the benefits of going green.

Dave Matthews is dedicated to educating and encouraging his fans around the world about how the smallest and simplest steps can go a long way to help save our planet. He’s gone so far as to establish the Bama Green Project, which is an organization committed to encouraging the use of environmentally-friendly biodiesel, eating locally, and using renewable energy sources such as solar power.

Matthews’ effort of living by example—both on and off tour—has been so impactful that he has completely retroactively eliminated the carbon footprint that his band has left on the planet while on tour.

Green Day has made a name for themselves both on and off the stage. On the stage they are known for hits such as 21 Guns, Time of Your Life, and more. Off stage the band has become environmental activists encouraging the awareness and dangers of America’s dependency on oil and other fossil fuels. The band encourages their fans to demand clean and renewable energy sources from their local and state political leaders.

In addition to their political activism for renewable energy sources, the group encourages the use of biofuels and supports the use of wind and solar energy sources to limit the amount of pollution emitted into the atmosphere.

Maroon 5 has put in a significant effort to keep their tours green and eco-friendly. The band only uses biofuels, and actively participates with Green Music Group, which is an organization that encourages the music industry to incorporate more environmentally safe practices throughout the business.

The band’s front man, Adam Levine, has been particularly boisterous about voicing his opinions on solar power and alternative energy solutions. He teamed up with the movement Vote Solar to encourage a limited use of personal energy, and is an advocate for solar energy solutions.

Hawaiian native, and former professional surfer, Jack Johnson is the poster child for the eco-friendly music industry. His deep appreciation for the environment caused he and his wife to co-found an organization that supports environmental education in schools, and led him to establishing his own record label, Brushfire Records.

At Brushfire Records, he requires distributors to be eco-friendly by only making CD labels from recycled paper, and built his recording studio out of environmentally safe materials. He powers the studio using solar panels, and insulated the building out of scraps from old blue jeans. Clearly Jack Johnson knows what it means to go solar and his efforts are leaving a positive impact on our environment.

Notably recognized for his time with *NSYNC and his career as singer/entertainer, Justin Timberlake has also made a name for himself as an advocate for sustainable energy and for being environmentalist. He was awarded by Environmental Media Awards with the Futures Award for his entirely green golf course, Mirimichi, in Tennessee.

He said his inspiration for buying and designing the eco-friendly golf course came from the idea that someone was going to “take paradise and put up a parking lot.” Instead, he decided to buy paradise himself and maintain the golf course to fit within its natural habitat and to honor the ecosystem in the surrounding areas. Timberlake admits that “doing things the green way is not always the cheapest way in the short term, but it’s the most sustainable way and the right way in the long term to do things.”

In addition to his hit singles and career in entertainment, Justin Timberlake has been making waves by encouraging other celebrities and his fans to be aware of their carbon footprints, and to make an effort to conserve energy by switching to more sustainable solutions.

You don’t have to be a celebrity or extremely wealthy to join the community of clean and sustainable energy sources. Palmetto Solar is a local company that encourages and promotes the use of solar power and offers financing options for those looking to install solar panels onto their homes.

Making the switch to solar is not just beneficial to the environment, but is also a more cost effective way to power your home. Using solar panels captures the energy from the sun, and converts it into electricity that you can use to power everything within your home. Contact the team at Palmetto Solar today to learn more about how solar works and how you can save with solar.

Follow Palmetto Solar on our Facebook and Twitter pages to stay up to date on the latest solar news and clean energy updates. We explore a huge selection of solar energy topics from sources including top news organizations and indie publications. We round up the info you care about and make it easy to share with others. We love spreading the latest solar news and information. We hope that you will too.