This information helps the operator to fine-tune each hydroelectric power station’s generating power to meet current energy economics and to sell the generated power for the highest possible return. 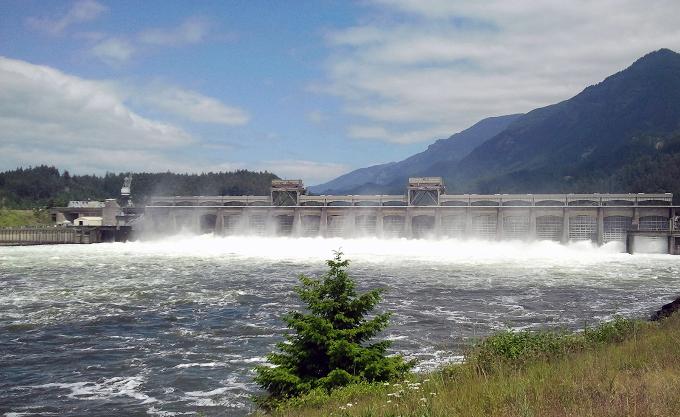 The hydroelectric plants in the Columbia River basin in the Pacific Northwest generate 22,000 MW in output. In the photo: a dam wall in the many-branched dam system. Credit: Fraunhofer IOSB

Following projects in Germany and China, and in cooperation with the Dutch-American company Deltares, IOSB researchers are now applying their expertise to one of the world’s largest hydropower operators. The Bonneville Power Administration (BPA) in the northwest of the United States runs a complex and extensive dam system in the Columbia River basin that collectively generates around 22,000 megawatts (MW). This is more than five times the output in Germany, which operates some 7500 hydroelectric plants on rivers and lakes and generates 4300 MW.

More than 12 million people live in the BPA’s catchment area, which covers parts of the U.S. states Oregon, Washington, Montana, California, Nevada, Utah and Wyoming. Together with Deltares, researchers on the HyPROM project have developed a functioning simulation and optimization model that ensures the best possible operation of the BPA dam system based on predefined parameters.

Very different parameters come into play when it comes to generating hydroelectric power — rainfall levels, volume and speed of the water, not to mention general climate factors. At the same time, regulations regarding the protection of fish, flood control or environmental guidelines have to be accommodated.

Hydroelectric plants can be operated optimally only when you take all the variables into account. As an additional challenge, HyPROM takes on the complexity of the extensively networked Columbia River basin dam system — it covers two different rivers with an average water flow of 7,500 cubic meters per second, ten hydro plants, ten reservoirs and an altitude difference of 350 meters.

Currently, researchers are working on expanding the simulation and optimization model to better encompass energy-economic aspects, bearing in mind the fluctuating availability of wind and solar energy as well as randomly changing market prices. Then we can incorporate even more information in our calculations. This creates a scenario that comes much closer to reality.

The project partners plan to integrate the newly developed technology into a system that will help employees to make the right decisions in running the facility. The aim for the future is to enable BPA to adjust its entire control and management system in under an hour to react to changing circumstances. That way, BPA could choose to sell hydroelectric power only when the price is right. At other times, it could replenish its reservoirs to empty them later, when it makes economic sense or is technically necessary.

For operators who sell not only hydroelectric energy but also other energy sources with a fluctuating supply, such as wind and solar energy, the price is an especially important factor.