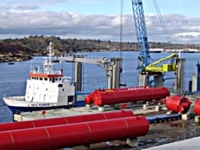 Arnish, Isle of Lewis, UK [RenewableEnergyAccess.com] A large transport ship arrived in the Western Isles to load up and transport the first of three Pelamis Wave Energy Converters destined for Portugal. Last year Ocean Power Delivery (OPD) announced the signing of an order with a Portuguese consortium, led by Enersis, to build the initial phase of the world’s first commercial wave-farm to generate renewable electricity from ocean waves.

The machines will be delivered to the Port of Peniche where they will undergo final assembly prior to commissioning and installation later this year at a site 5 kilometers off the coast of northern Portugal, near Povoa de Varzim. The first stage consists of three 750-kW Pelamis machines with a combined rating of 2.25 MW. A letter of intent has been issued to order 28 more Pelamis machines before the end of 2006 subject to satisfactory performance of the initial phase. When complete, the eventual 22.5 MW project is expected to meet the average electricity demand for more than 15,000 Portuguese households while displacing more than 60,000 tons per year of carbon dioxide emissions from a conventional generating plant. “This is a tremendously exciting day for OPD, our suppliers and the wave energy sector. We are delighted to have reached this important milestone and we look forward to installing and commissioning the project in Portugal this summer,” said Richard Yemm, Managing Director of OPD. In response to questions about why this first project has not been located within the UK, Yemm said that Portugal has been quicker to prioritize exploitation of its wave energy resource, and to recognize the commercial opportunity that it represents. “The decision where to build this project was not ours but our customers’,” Yemm said. “The Portuguese government has put in place a feeder market that pays a premium price for electricity generated from waves compared to more mature technologies such as wind power. This allows the commercial investment in early stage projects, which is crucial to move the technology forward.” This is exactly the same approach that delivered the wind industry in Denmark and Germany, which currently has a turnover of more than Euro 12 billion/year [USD$14.6 billion] with 60,000 employed worldwide, Yemm said. He added that the UK Department of Trade and Industry (DTI) has been supportive with research and development grants but has yet to offer a similar incentive as is available in Portugal. “The Scottish Executive is now taking the lead with proposals to deliver such a market,” Yemm said. “However this needs to be nailed down quickly or we may miss the boat. Without a clear route to commercial deployment in UK waters soon, the industrial opportunity is likely to move to Portugal.”