The same month as another record was set in the world of solar power, the solar-powered ship PlanetSolar, broke her previous record of Transatlantic crossing by more than 4 days. The ship didn`t spend longer than 22 days, 12 hours, and 32 minutes across the Atlantic Ocean.  The new record is currently in the process of being authorized by Guinness World Records. The expedition covered about 2867 miles (5310 km). 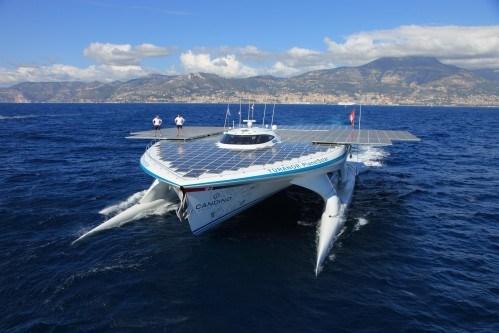 The ship was designed and constructed in New Zealand and was given the full name Tûranor PlanetSolar (Tûranor meaning power of the sun in Tolkien`s mythology).

Being powered by the sun, the crew encountered some problems with clouds, sometimes for several days in a row, which lead to frequently route changes:

“It was necessary to make a significant deviation to the south, which increased the travelling distance by 7%, but enabled us to avoid winds and unfavorable swells” explains MS Tûranor PlanetSolar’s captain, Gérard d’Aboville.

Over the winter, the crew made several significant improvements to the ship, which all has contributed to the new record.

Taken from the official webpage of PlanetSolar:

«PlanetSolar» is a catamaran that runs solely on energy found in light. The additional removable parts allow it to expose a total of 516 m2 of photovoltaic surface (solar panels) to the sun. This impressive data make it the biggest solar run ship in the world.

These solar panels have an efficiency rating of 18.8%, not as much as the best solar panels, but definatley high up there.

Since PlanetSolar is only powered by clean solar energy, the ship is perfect for taking undisturbed biological samples of air and water, which is what the ship`s next expedition is all about: Measurements will be taken along the Gulf Stream in order to study the key parameters of climate regulation, especially atmospheric aerosols and phytoplankton. The “PlanetSolar DeepWater” scientific expedition is conducted by the University of Geneva.