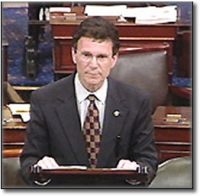 Senate Minority Leader Tom Daschle (D-South Dakota) recently aired election ads focusing on his crusade to expand ethanol use and production. Daschle brought ethanol into the forefront of his campaign to boost the support of his constituents, as the senator campaigns for a fourth term next year.

Washington, D.C. – August 5, 2003 [SolarAccess.com] Daschle’s TV spot highlighted his efforts to secure a provision that would “triple production” of ethanol, a corn-based fuel substitute, in South Dakota. The ad begins with industry leaders speaking about the importance of ethanol to the state’s economy. Halfway through the commercial, Daschle, who is introduced as “Tom,” appears in open-necked shirt against the backdrop of a flowing river and the South Dakota landscape. “I’ve been fighting the ethanol fight now for 25 years,” Daschle says. “We’ve always had a struggle. But at the end of the day, we’ve always won those fights.” After statements by industry leaders about what the legislation could mean for the South Dakota economy, the ad closes with a prompt that viewer should “call to become a citizen co-sponsor of Daschle’s plan to expand ethanol.” “It’s a very smart approach,” said Peter Fenn, a Democratic political consultant, who also teaches a graduate class on political advertising at George Washington University. “It’s a testimonial in one respect; it’s very South Dakota. It’s not ideological; it’s not overly political. At the end there’s a response device, so it empowers people to join this fight. This is a very substantive, solid ad.” The ad campaign was launched in the Sioux Falls market, which has traditionally been a base of support for Daschle. Daschle has yet to draw a formal GOP opponent; but the senator, who is up for reelection next year in a pro-Bush state, could face former Representative John Thune (R-South Dakota) in what experts predict would be a tight race. A recent McLaughlin poll showed Daschle in a 46-43 statistical tie with Thune in Sioux Falls. Elsewhere in the state Thune had a substantial lead, although he is not yet a declared candidate. “If there’s one non-partisan issue that works well with either party in the Midwest, it’s ethanol,” said Tony Blankley, former communications director to then-House Speaker Newt Gingrich (R-Georgia) and editorial page editor of the Washington Times. In a statement last week regarding the Energy Policy Act of 2003, Daschle made an appeal on behalf ethanol. He reiterated his desire to see the use of ethanol nearly tripled in the United States. “In addition to making America more energy independent and environmentally sound,” said Daschle, “the Renewable Fuels Standard (RFS) benefits agriculture and the nation’s economy. In South Dakota alone, the RFS has the potential to create 10,000 new jobs and bring an additional $620 million a year to the state.” On Daschle’s website, the senator documents his long-standing support for ethanol, as well as other forms of renewable energy. “Since I first arrived in Congress in 1978, expanding the use of ethanol has been one of my top priorities,” said Daschle. “We know that ethanol is good for our rural economy, good for the environment, and good for our national security.”