London, UK [Renewable Energy World Magazine] ‘This would be our largest renewable energy project thus far,’ said Michael W. Allman, president and chief executive officer of Sempra Generation, ‘and move us closer to our stated goal of becoming the first US company to own 500 MW of solar power.’ In March, several of the Renewable Energy World team were able to tour the plant, guided by Sempra’s plant manager, Kevin Gillespie. Later that day, about 35 delegates from the Renewable Energy World North America event (being held in nearby Las Vegas, USA) toured the facility as well. 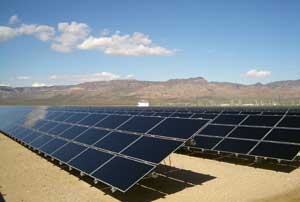 Construction of the 10 MW El Dorado Energy Solar plant – the largest thin-film plant in operation in the Americas and Sempra Energy’s first solar power project – commenced July 2008 and was completed six months later, in December. It involved the installation of more than 167,000 PV modules on 80 acres (32 hectares) of desert property designated as a renewable energy zone and leased from Boulder City. Also in that zone – albeit in the hands of a different owner/operator – is Acciona Solar’s Nevada Solar One, a 64 MW parabolic trough solar thermal power plant. Both these impressive plants – which are only a few hundred metres away from each other – are sited in the barren landscape of Boulder City’s El Dorado valley, a wide, flat, desert valley that nature has blessed with a superb solar resource. Just as critical for the economics of solar power plants, energy planners have endowed the valley with a high-voltage transmission line. Several facilities are connected to this, notably Sempra’s own 480 MW El Dorado Energy gas-fired plant, a highly efficient, air-cooled combined cycle plant. Both Sempra Generation’s gas and solar plants are serving markets in the southwestern states of the US. The entire 10 MW output of the solar plant was contracted under a 20-year power purchase agreement with Pacific Gas and Electric (PG&E), the Northern California utility. This is the first of PG&E’s solar projects to come online.

‘Confronting climate change and the need for new, clean electric resources is one of the great challenges we face,’ said Neal Schmale, president and chief operating officer of Sempra Energy, earlier in the year. ‘We are excited about the potential of solar power and see this project as an important advance in solar power in North America.’ Sempra Energy, based in San Diego, is a Fortune 500 energy services holding company with 2008 revenues of nearly US$11 billion (€8.3 billion). Sempra Generation operates and maintains a fleet of natural gas fuelled and solar power plants serving the US market and is in the process of developing renewable power projects in the Pacific Southwest.

Given the existing power plant infrastructure at El Dorado – in terms of buildings, control room, staff facilities etc., the solar plant required next to no construction other than the PV arrays, inverter houses and cabling. Staffing is minimal too – just one dedicated operator for the entire plant backed up by colleagues. For plant manager Kevin Gillespie, this is his first experience of PV: ‘we’re excited about it’ he says.

Though the usually clear desert skies suggest that the plant would use trackers to maximize output, the plant does in fact use fixed mountings. On balance, as Sempra representatives explained, it was thought best to keep the plant as simple as possible, given the large site and the wish to run the plant with only a small personnel overhead. They concluded that trackers would probably have required a greater maintenance commitment, and certainly would have increased the capital outlay. So the arrays are fixed, positioned to give the maximum overall yield over the year as a whole. In this part of the world, customer demand peaks during the day (especially the afternoon), largely due to air conditioning. That is when output from the plant is greatest. Energy storage of course is not yet a real option for large-scale PV technology, though it is for concentrating solar thermal power. On the other hand, as Sempra points out, this technology has no need for any water, while solar thermal power does, even though it is recycled as much as possible.

The 10 MW plant was installed on a modular basis, made up of 10 x 1 MW ‘packages’. The 75 kW panels are in strings of 10. The strings are then connected in parallel. This gives the voltage and current required. Power is then fed through combiner boxes and each megawatt is served by an inverter house with two 500 kW Xantrex inverters. This same pattern is rolled out 10 times in all. As Sempra staff made clear during our visit, there’s plenty of space to roll out the pattern many more times.

After three months of operation, Sempra staff were extremely positive about the performance of the plant, which has been in line with, or even surpassed, expectations. Surprisingly, perhaps, dust had not presented problems. This is being minimized by stabilization measures taken to bind the dusty earth on the site and prevent it from becoming airborne (a non-toxic stabilization was applied before the arrays were put in place). Both wind and the occasional rain had sufficed to keep the module surfaces clear during those first months of operation.

Breakages? There had been some occasional ones, explained Gillespie, mostly due to thermal stresses, but it is a quick and simple job to exchange a panel.

The modules of choice are from First Solar – a company with its headquarters in neighbouring Arizona. First Solar’s cadmium telluride thin-film PV has also been selected for use in numerous large-scale PV plants in Germany (see David Appleyard’s feature in the January/February 2009 issue of REW magazine). First Solar was also the engineering, procurement and construction contractor for the project and is charged with monitoring and maintaining the plant.

For the new 48 MW plant – which will go by the name of Copper Mountain Solar – Sempra Generation has announced that First Solar will also be the engineering, procurement and construction contractor. The addition of a further 48 MW will bring the total up to nearly a million photovoltaic modules (the existing 10 MW plant uses 167,000). Sempra Generation said in April that construction on the extra 48 MW would commence once the company has put in place a contract to sell the facility’s power output.

While Germany and Spain have led the world on utility-scale solar PV power plants, the phenomenon is relatively new in the North America. Last year, the US Solar Electric Power Association led a fact-finding mission to Germany – 35 utility decision-makers went to learn from the German experience of integrating large quantities of solar electricity into the national grid without creating transmission bottlenecks, system quality distortions or scheduling issues. During 2008 a significant number of US utilities either initiated large projects or announced large solar purchases.

Said Nevada Governor Gibbons at the official opening of the 10 MW plant in January: ‘Sempra Energy’s new solar project illustrates substantial foresight and the willingness to deploy an advanced photovoltaic technology on a scale attractive to utilities and other major power customers. I look forward to seeing more projects like this in the Silver State.’

Take a tour of the El Dorado Solar plant here.