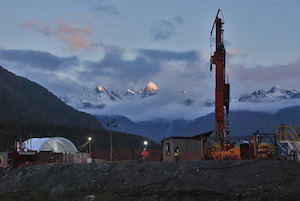 University of Otago yesterday said that a collaboration by scientists who drilled about a half-mile into the Alpine Fault of New Zealand’s South Island has revealed surprisingly high temperatures and the potential for large geothermal resources in the area.

The Deep Fault Drilling Project, jointly led by Victoria University of Wellington, GNS Science and the University of Otago, was carried out in 2014 in New Zealand’s Westland Province, north of Franz Josef Glacier.

According to University of Otago, the site was drilled by a team of more than 100 scientists from 12 countries, who were working to understand how earthquakes occur on geological faults.

The results of the project, published yesterday in Nature, discuss the site’s geothermal gradient—a measure of how fast the temperature increases going deeper beneath the earth’s surface.

The project team discovered water at about 2,000 feet depth that was hot enough to boil. Similar geothermal temperatures are normally found at depths greater than two miles, the university said.

Warren Gilbertson, chief operating officer of the charitable trust Development West Coast, said in a May 18 statement that the discovery could transform the economy and resilience of Westland, and provide a significant clean energy resource that could be developed using local people and equipment.

“The location of geothermal activity and its possible benefit and association to the dairy and tourism sectors provide real opportunities from an economic perspective,” Gilbertson said.

Additional exploration and drilling will be needed to assess the economic potential.