The German state of Schleswig-Holstein recently approved doubling the land area devoted to wind energy. The move is significant because the North-German land or state bordering Denmark has the highest concentration of wind energy in Germany.

The decision culminates a multi-year planning process that was initiated by the previous conservative government and was completed by the current coalition government of Social Democrats, Greens, and a small party representing the Danish-speaking minority.

Wind energy has become the “work horse” of the Schleswig-Holstein economy and currently provides nearly 50% of the state’s electricity consumption from more than 3,200 MW of wind generating capacity.

There is more than 200 kW of wind generating capacity per square kilometer in Schleswig-Holstein. This is a higher density of wind turbines on the landscape than in any other German state, in Denmark, and of any US state.

Wind turbines currently occupy 0.8% of the land area in the state. However, further expansion was constrained by state planning policy that limited the area usable for wind energy.

Schleswig-Holstein is currently a net exporter of electricity. It generates more than twice its internal consumption. In the past this surplus generation was from nuclear power. By 2020 wind energy on land alone will replace the state’s aging reactors, all now slated for closure in 2022.

How much of this new renewable generation will be owned locally is unknown. On land, there remains a strong preference for local ownership of renewable energy development–and even transmission. In the region of Nordfriesland, which includes the wind capital of Husum, 90% of all wind capacity is locally owned, as is most of the biogas and solar photovoltaics.

Offshore wind is the sole domain of the multinationals. The only proposed community-owned offshore project, the pioneering 240 MW Butendiek (outside the dike), was formally cancelled in 2010 after years of painstaking work. The new minister of energy Torsten Albig told attendees at the wind energy exhibition in Husum this past September that Schleswig-Holstein plans to generate 300% of their consumption with renewable sources by 2020.

Schleswig-Holstein consumes 12 TWh annually. 300% of consumption implies 36 TWh generated annually by renewables. Current targets for wind offshore and on land is 28 TWh by 2020 from 9,600 MW. 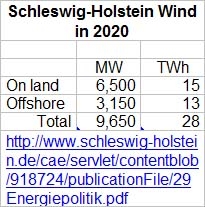 The German wind turbine owners association (Bundesverband WindEnergie) estimates that wind turbines installed on only 2% of Germany’s land area could provide two-thirds of the country’s electricity.

Schleswig-Holstein’s long-awaited decision is the first formal step in setting aside nearly 2% of the state’s land area for use by wind energy. The wind association and the state government say this decision is possible because of the widespread acceptance of wind energy that has resulted from the high percentage of local ownership.