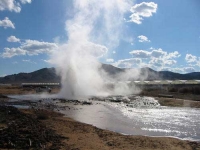 Reno, Nevada [RenewableEnergyAccess.com] Geothermal is the most reliable form of renewable baseload power and given the proper financial support from the private sector — and favorable policies from government — it will become a viable alternative to coal, natural gas and nuclear, according to speakers at the Geothermal Resource Council’s annual meeting in Reno, Nevada earlier this week.

The meeting, held in conjunction with the Geothermal Energy Association (GEA) trade show, drew an estimated 2,000 people and over 50 exhibitors ranging from project developers to investment bankers.

While geothermal currently makes up less than 0.5% of the nation’s energy supply, speakers at the opening session were optimistic about the future of the industry. They encouraged attendees to continue working on the goal of bringing geothermal to cost parity with fossil fuels and to gain the same level of attention that other forms of renewable energy have received in recent years.

But getting there will require a focused national effort to formulate policies that level the playing field for geothermal energy—and allow the industry to access critical financial resources from the government and private sectors.

“We spend a lot of time talking about the resource that beams down from space or blows over us. But we don’t spend enough time looking at our very abundant terrestrial geothermal resources that will provide reliable, renewable baseload power,” said Andy Karsner, Assistant Secretary for Energy Efficiency and Renewable Energy at the U.S. Department of Energy (DOE).

According to a recent report from MIT, “a cumulative capacity of more than 100,000 MW from enhanced geothermal systems (EGS) can be achieved in the United States within 50 years with a modest, multiyear federal investment for R&D in several field projects in the United States.” Currently only 3,000 MW—or 3% of that potential—is installed in the U.S.

In May 2007, the GEA issued a report that identified 74 new geothermal power projects in Alaska, Arizona, California, Hawaii, Idaho, New Mexico, Nevada, Oregon, Texas, Utah, Washington and Wyoming. According to the GEA, these projects will double U.S. geothermal power capacity to almost 6,000 MW.

Another report on the international market, which the GEA released in April, identified 40 countries with geothermal power development underway-and projected a 50% growth in power production worldwide by
2010.

“We have seen dramatic new interest in the geothermal industry,” said Karl Gawell, executive director of the GEA. “That is translating into many new geothermal projects in the U.S. and around the world.”

The MIT report, which was authored on behalf of the DOE, also found that “EGS is one of the few renewable energy resources that can provide continuous baseload power with minimal visual and other environmental impacts.” The study concluded that “geothermal systems have a small footprint and virtually no emissions, including carbon dioxide. Geothermal energy has significant baseload potential, requires no storage, and, thus, it complements other renewables-solar (CSP and PV), wind, hydropower-in a lower carbon energy future.”

However, as is the case with all the other renewable energy technologies, the geothermal industry faces many formidable challenges before the resource can be fully exploited. Because projects are so capital intensive and require a relatively long timeframe for completion, developers can find it difficult to secure up-front financing for projects.

In addition, the science for identifying the exact location and capacity of a resource still requires further development.

Due to the high cost of drilling, it is critical for developers to strike the resource on the first try. Because of this the geothermal industry is now looking to the oil and natural gas industry for resource assessment tools and advanced drilling equipment that will allow for speedier, more cost-effective development. But with oil prices hovering around $80 per barrel, there is often competition between the geothermal and fossil fuel industries for such equipment, which can significantly slow a project.

Getting consistent support from policy makers and regulators has also proven to be difficult for the industry. Loan guarantees, risk insurance and long-term production tax credits are needed to encourage more large-scale development and keep the industry thriving. The industry has been pushing hard to gain these incentives in the energy bill currently in Congress.

In addition they are also requesting stronger support from the DOE, which considered scrapping its geothermal program last year. Although Assistant Secretary Karsner did not mention that fact, he did acknowledge that more support from the government is needed and also asked the industry to step forward and demonstrate the leadership required to get the job done.

“Is the Department of Energy up to the task of providing meaningful assistance to your industry? I hope so. But in the meantime, your industry needs to tell the government how we can make a difference,” said Karsner.

Oliver Strube is publisher and co-founder of RenewableEnergyAccess.com. Stephen Lacey is editor and host of the Inside Renewable Energy podcast.