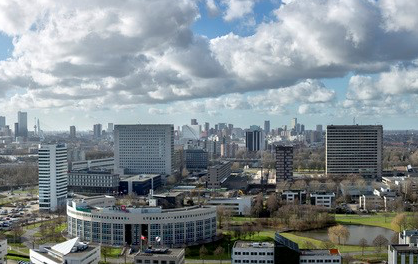 First of a five-part series on Rotterdam’s efforts to become a sustainable and “climate-proof” city.

Rotterdam, a Dutch city of about 630,000 situated in a low-lying delta on the North Sea, has a set of ambitious long-range plans to become sustainable and “climate-proof.” By climate-proof, the city means well-prepared for the impacts that climate change will have on the city.

The city’s clean energy and climate adaptation plans involve billions of euros in investment and management of the city’s energy, water, land, raw materials, and waste. Implementation of the plans will impact air quality, public health, mobility and transport, and outdoor public spaces. The plans will also influence the city’s biodiversity, building energy use, construction, and even demolition.

The city’s efforts are founded on extensive public outreach to engage all major segments of Rotterdam in its sustainability and climate-proofing campaign. To facilitate a rapid transition to clean energy, Rotterdam’s city government is striving to remove obstacles to sustainability. The Municipal Executive Committee, meanwhile, is trying to attract funding from the federal government and European Union, lobby for legislation and infrastructure funding, and create partnerships that advance sustainability.

The city government is trying to serve as a role model by making its own operations sustainable, including the operation of its property and vehicles, and has adopted sustainable development guidelines and purchasing practices.

The city’s sustainable development guidelines require that, in addition to being energy efficient and climate proof, new developments must lead “to a more child-friendly, greener, cleaner, and healthier environment,” creating present value while leading to future benefits.

A common concern of city planners is their determination to discover economic and quality-of-life opportunities for Rotterdam’s citizens as the city goes about the challenging, long-term work of reducing greenhouse gas emissions and providing protection from rising seas and extreme weather.

The Rotterdam Climate Initiative (RCI) is the municipality’s primary tool for meeting its climate goals and is a voluntary collaboration of the city, its environmental agency (DCMR), the port of Rotterdam, and Deltalinqs (the umbrella association for Rotterdam industry). In its comprehensive effort to tackle the causes and effects of climate change, the initiative considers the interrelationships of the environment, economy, climate, energy, water, and people. 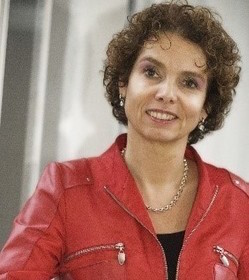 Industry, responsible for 85 percent of Rotterdam’s greenhouse gas emissions, played a leading role in developing the RCI. Early support for climate action in Rotterdam came from a coalition called “Together,” formed in 2006 by the city, DCMR, its port authority, and Deltalinqs. According to Paula Verhoeven, Director of Urban Planning and City Development (right), the impetus for the coalition came from the Clinton Climate Initiative.

Since 2014, Rotterdam has also been an active participant in the 100 Resilient Cities (100RC) network, launched and funded by the Rockefeller Foundation to develop “a road map to resilience” for participating cities.

The network’s approach is to help cities make their citizens, infrastructures, governance, and economies more resilient to environmental, economic, and technological stresses and shocks. The 100RC network is therefore dedicated to helping cities survive, adapt, and grow, regardless of the stresses they encounter, and to “live better in good times and emerge stronger after tough times.”

Although the city is no longer talking much to the public about carbon dioxide (CO2) and has relinquished its official commitment to cutting CO2 emissions in half by 2025, it is still committed to climate proofing the city and the region.

The RCI’s overarching purpose is not only to make Rotterdam more prosperous, attractive, and sustainable, but also—through a component Rotterdam Climate Proofing (RCP) program—to protect the city physically from the impacts of climate change.

In addition to Rotterdam’s role in the 100RC network, the city also belongs to C40 Cities and is a leader in the Connecting Delta Cities network inspired by the Clinton Climate Initiative. The goal of the Connecting Delta Cities network is to exchange knowledge about water management, climate adaptation, and sustainable development among cities globally.