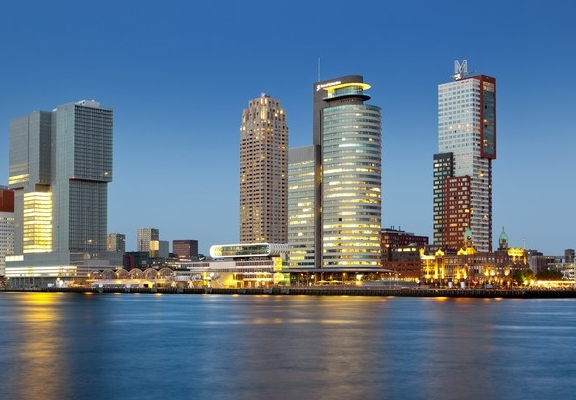 Third of a five-part series on Rotterdam’s efforts to become a sustainable and “climate-proof” city.

Can the city of Rotterdam cut its CO2 emissions substantially and become 100 percent climate-proof by 2025? The city aims to reduce its greenhouse gas emissions by increasing its use of district heating and cooling, and by using renewable energy to power transportation while encouraging the use of electric vehicles.

The port of Rotterdam’s waste incinerator and industries generate enough waste heat to supply 1 million households with hot water. This city of 630,000 thus has substantial potential for district heating to share residual industrial heat with homes, businesses, and institutions. The use of district heating is integral to Rotterdam’s plan to phase out natural gas and reduce carbon emissions. 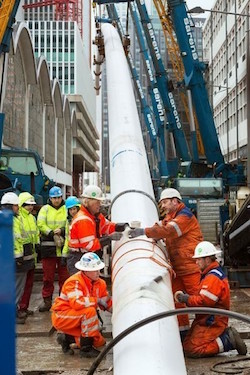 The district heating system is, in essence, a closed loop with two primary pipes. One pipe supplies hot water. A second returns the water at a lower temperature to the industrial heat source, where it is reheated before being piped to users.

Almost 20 percent of Rotterdam’s homes are now on district heating, eliminating the emission of 182,000 tons of CO2 annually. Although the cost of building the district heating infrastructure has been approximately three billion euros, the system will generate about twice as much in sales revenue.

The greenhouses that receive district heat also use CO2 piped separately to them to promote plant growth. They previously produced their own heat and CO2 with natural gas-fired combined heat and power (CHP) plants. Today, with the availability of district heating and the waste CO2 distribution system, their heat and CO2 requirements can be met without CHP plants.

Under a provision to the Rotterdam Building Act in July 2007, any new buildings being constructed in an area that already has district heating must be connected to the system. Astrid Madsen, who manages the city’s district heating and cooling program and other aspects of its energy transition, indicates that “new buildings are not the challenge, existing buildings are.” Between 80-90 percent of the buildings that will be standing in Rotterdam in 2050 are already built, she points out.

Rotterdam is not only working with other cities and its region to expand district heating, but it is also active internationally. The city is part of an international district cooling and heating consortium known as CELSIUS. The consortium brings together five European cities with similar energy baselines—Cologne, Genoa, London, Gothenburg, and Rotterdam—and 20 other partners that include energy companies, research institutions, and universities. Together, they form a network of more than 50 cities, exchanging knowledge and experience.

Aspiring to be the world’s cleanest public transportation company, Rotterdam’s RET uses clean renewable energy to power its trolleys and subways. It plans to extend the vehicles’ ranges by capturing and reusing braking energy, a process known as recuperative braking. 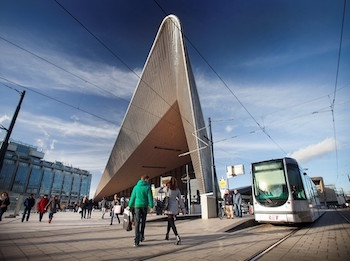 Through its Power Surge Program, Rotterdam is also encouraging the use of electric vehicles (EVs), which reduce noise, carbon emissions, and fine airborne particles that damage people’s lungs. “We’re right in the middle of implementing a huge zone where polluting cars will no longer be allowed after January 1 [2017],” said Director of Urban Planning and City Development Paula Verhoeven.

To encourage demand for EVs, the city is offering various incentives. “If you have an electric car, you get a charging point for free from the city,” Verhoeven said. The city also offered free parking permits for the first 1,000 EVs to register for Power Surge.

Rotterdam has specific goals for increasing the use of public transport, traditional and electric bicycles, scooters, and car sharing. Biodiesel fuels are also being introduced; in fact, the local government of Rotterdam—including city officials and the mayor—fuel their vehicles with biofuels.

The city is also pursuing various other initiatives to strengthen environmental education for its children, subsidize green roofs and facades to make the city more climate resilient, and replace conventional lighting in public spaces with energy-saving LEDs.

The only major discordant note amidst the city’s broad emission reduction efforts is its heavy reliance on its two new coal power plants, which opened in 2015 and 2016. This effectively undermined the city’s goal of cutting its CO2 emissions 50 percent below 1990 levels by 2025.