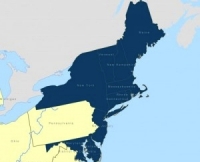 A three-year summary of America’s first carbon trading program was released yesterday. The news is pretty good for anyone who cares about reducing carbon emissions; it’s inconvenient for anyone hell-bent on preventing America from implementing a carbon pricing plan.

According to the program administrator of the Regional Greenhouse Gas Initiative (RGGI) — a nine-state cap-and-trade market established in the Northeast in 2008 — average annual CO2 emissions have fallen by 23 percent compared to emission levels before the start of the program:

Average annual CO2 emissions for the three-year period were 126 million short tons, a 23 percent reduction when compared to the preceding three-year period, 2006-2008. Three-year average electricity consumption across the ten-state region declined only moderately, by 2.4 percent, between the same periods, according to the U.S. Energy Information Administration.

CO2 emissions were collectively reduced to 33 percent below the annual pollution cap of 188 million short tons.

And the predictions of economic collapse and suffering ratepayers? Not happening.

The progress report follows a study from the Analysis Group finding that RGGI added $1.6 billion in value to the economies of participating states, setting up ratepayers for more than $1.1 billion in savings through improved efficiency and development of renewable energy. All this activity created 16,000 jobs in the first three years of the program.

“Five years ago, critics were saying climate programs like RGGI couldn’t succeed in the U.S.,” said David Littell, Commissioner of the Maine Public Utilities Commission and Vice-Chair of RGGI, in a statement.

“Now, we are seeing significant emissions reductions in the context of economic recovery as we switch to cleaner fuels and learn to use energy smarter. In fact, RGGI has allowed companies to stay competitive and reduce their energy expenditures to weather the recession and come out stronger.”

In April, Environment New Jersey issued an analysis showing that states participating in RGGI reduced emissions 20 percent faster and grew GDP twice the rate of the rest of the U.S. through 2009. However, that report was not a completely accurate picture of the impact of RGGI, as it only took into consideration the first year of the program.

When first implemented with bi-partisan support, administrators assumed it would lower utility CO2 emissions by as much as 35 percent compared to a business-as-usual scenario. However, administrators didn’t foresee such a dramatic drop in emissions so quickly.

The steep decline in utility-sector emissions occurred due to a decline in coal generation, a switch to natural gas, and the economic downturn. An executive at the Massachusetts power company National Grid explained that CO2 was falling because of the “effects of RGGI on top of that.”

The emissions picture is complicated and certainly different than expected in 2008. But the outcome — reduced coal use, lower emissions, and greater deployment of renewables and efficiency — is exactly what was intended.

It’s also the exact opposite of what opponents claimed would happen.

Americans for Prosperity, the Koch-backed group at the forefront of spreading lies about cap and trade, absurdly claimed that RGGI would raise rates by 90%. RGGI’s impact on rates has been so negligible, pulling out the cost “would be like factoring in the cost of mowing the lawn at the power plant or factoring in the property taxes,” explained Seth Kaplan of the Conservation Law Foundation.

And last spring, a bill was introduced in the New Hampshire legislature that would have pulled the state out of RGGI. The legislation copied language from a “model” bill developed by the American Legislative Exchange Council, a “stealth business lobbyist” that helps large corporate interests write laws for a fee.

The ALEC-written language in the bill said that RGGI had “increased consumer costs for electricity, fuel, and food.”

After three years of experience, the data shows that RGGI has played a part in lowering emissions, helped businesses deploy more clean energy, and done so by adding very little upfront costs to ratepayers.

Once again, real world experience proves that absurd doomsday scenarios about cap and trade pushed by pundits and political disinformers are wrong.