Hybrid car sales have taken off in recent years, with a fuel-sipping combination of electric- and gas-powered technologies that simultaneously deliver energy efficiency, low emissions, and strong performance. The Energy Department’s National Renewable Energy Laboratory (NREL) — which played a pivotal role in putting hybrids on the road — has applied a similar strategy to its talent base and partnerships, bringing together the best minds from the worlds of research and industry. 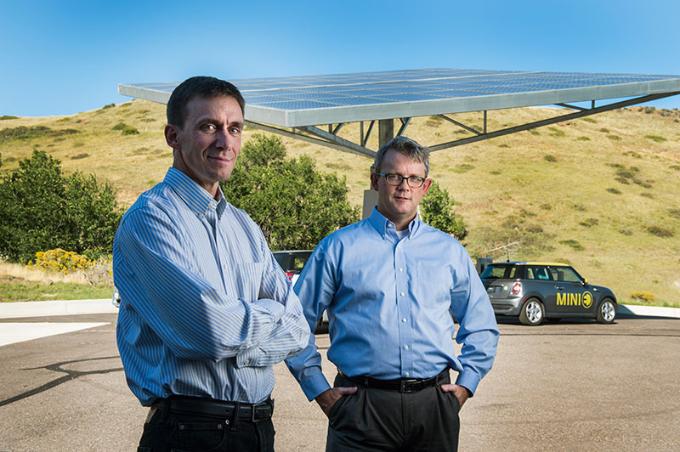 Transportation and Hydrogen Systems Center Director Chris Gearhart, right, and Vehicle Technologies Laboratory Program Manager John Farrell joined NREL in 2013 after three collective decades in the automotive and fuels industries. These industries turn to NREL for support in addressing many of their energy efficiency challenges. Photo by Dennis Schroeder, NREL.

Hybrid car sales have taken off in recent years, with a fuel-sipping combination of electric- and gas-powered technologies that simultaneously deliver energy efficiency, low emissions, and strong performance. The Energy Department’s National Renewable Energy Laboratory (NREL) — which played a pivotal role in putting hybrids on the road — has applied a similar strategy to its talent base and partnerships, bringing together the best minds from the worlds of research and industry.

NREL’s Transportation and Hydrogen Systems Center (THSC) provides just one example of how NREL partners with industry to address some of the toughest energy efficiency challenges. NREL’s work with individual companies — from startups to established corporations — includes full collaboration, technical assistance, deployment guidance, research facility use, and technology licensing. The lab has also attracted national-caliber experts to its staff from the commercial sector, while continuing to bank on the intellectual capital of its research veterans.

“We recruited Chris and John because we knew they could effectively steer our transportation team even further along in meeting the Energy Department’s goals and the NREL mission,” said Associate Lab Director for Mechanical and Thermal Systems Engineering Barbara Goodman. “Their ability to provide industry perspectives was essential for maintaining our relevance.”

“Even in my Ford days, reducing petroleum consumption and greenhouse gas production was my mantra,” said Gearhart, who championed the company’s fuel cell system, stack, and hydrogen storage research efforts. “Being able to focus 100% on sustainable transportation solutions was the logical next step.”

Farrell might have spent most of his career in private industry, but he also draws on considerable experience working with Sandia, Oak Ridge, and Argonne national labs on Energy Department projects. He carried this spirit of public-private partnership with him to NREL.

“The government, automakers, component manufacturers — they’re all our partners,”  Farrell said. “We’re an Energy Department lab, responsible for moving forward energy-efficient solutions with the potential for significant market impact. That means our work must deliver the greatest possible energy savings, while being informed by private-sector realities.” 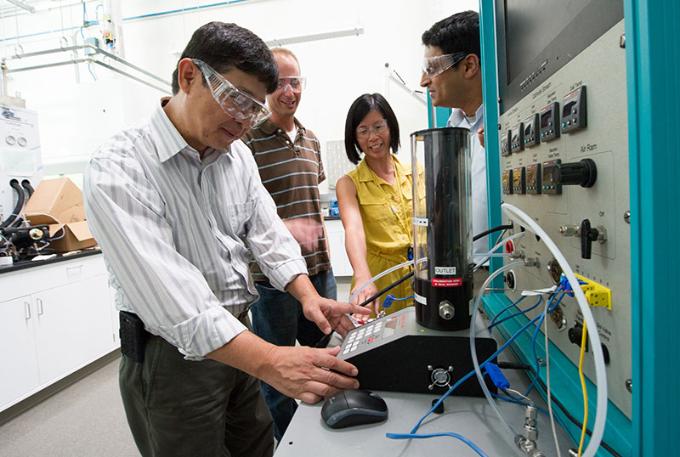 “NREL’s connection to the marketplace and deployment, its strong collaboration with industry — that’s not a given at every organization,” Farrell said when asked about the lab’s reputation with the commercial sector.

This approach to transportation projects dates back to the Energy Department’s launch of the Partnership for a New Generation of Vehicles project in 1993. NREL helped recruit General Motors (GM), Chrysler, and Ford as partners in this project that helped put the first of today’s hybrid vehicles on the road. In the last year, NREL has collaborated on sustainable transportation projects with partners including General Electric, the U.S. Advanced Battery Consortium, and all of the Big Three automakers.

“Our primary concern is to find the best possible solution, which may or may not already be on industry’s radar screen,” said Senior Engineer Matt Keyser, who has been recognized with three R&D 100 awards, the most recent in 2013. “We engage with our industry partners nearly every step of the way, so that when that new technology reaches the commercialization stages, it addresses real-world market needs.”

In 2013, NREL had 166 active cooperative research and development agreements (CRADAs), the largest number of any national laboratory. These partnerships have delivered tangible results and augmented resources. For example, NREL is leading 11 industry partners in the Energy Department-sponsored Computer-Aided Engineering for Electric-Drive Vehicle Batteries (CAEBAT) project. Partners have contributed $7 million to the project, effectively doubling funding, and the first design tools were released earlier this year.

“Over the last decade we’ve worked closely with Xcel Energy in exploring how wind power can be used to produce hydrogen for fuel cell vehicles,” says Fuel Cell and Hydrogen Technologies Laboratory Program Manager Keith Wipke. “Teaming up on this is a win-win. Our research team benefits from Xcel’s knowledge of large-scale utility operations, and we’re able to explore and validate strategies that can reduce wind power’s intermittency issues. Additional partnerships with electrolyzer companies help push the efficiency and reliability of the systems that use the wind electricity to split water.”

NREL also works closely with other national laboratories, government agencies, and universities. Currently, NREL is collaborating with five other national laboratories on projects exploring the potential for integration of renewable energy sources, the electricity grid, buildings, and electric vehicles as part of the Energy Department’s Integrated Network Testbed for Energy Grid Research and Technology (INTEGRATE) initiative. 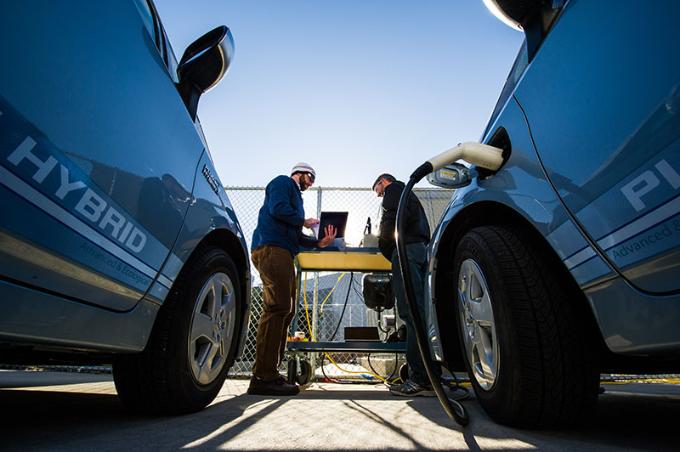 NREL leverages partnerships to deepen its understanding of factors that impact industry and consumer adoption of sustainable transportation solutions.

NREL not only benefits from the savvy of industry partners, but also has a long track record of attracting and retaining top scientists, engineers, and analysts — both from other research institutions and from the private sector. The lab’s 2,000-plus employees come from a range of backgrounds. What they have in common is a passion for renewable energy and energy efficiency research.

“The balance of staff members with both types of backgrounds really strengthens our capabilities,” Gearhart said. “Many of our team members have actually moved back and forth between the research and private sectors, so they intimately understand priorities, concerns, and protocols on both sides. This gives us the critical mass of research expertise needed to tackle ambitious projects, while also knowing that the information, insights, and technology we’re delivering are market viable.”

The background of NREL’s transportation staff is quite evenly divided, with approximately 45% of THSC’s 84 researchers and managers coming from companies including Ford, GM, Chrysler, Volkswagen, Lockheed Martin, and Corning. The insights on development, manufacturing, scale-up, and operations provided by these former industry players complements the deep research expertise and institutional continuity supplied by staff members with decades of experience at the lab.

“While at GM, I helped lower emissions and meet fuel economy goals by designing and testing light-duty emission control systems,” said Kevin Walkowicz, who now heads up NREL’s transportation testing and analysis team. “For the past 13 years, I’ve continued to build on that, working with the commercial vehicle industry to green their fleets of heavy- and medium-duty trucks.”

This industry know-how, in turn, is supplemented by the knowledge of staff members who come from other research institutions, such as national labs, government agencies, or academia. Veteran NREL researchers’ commitment to innovation has netted the lab 57 R&D 100 awards, more than 200 royalty-bearing licenses, and in excess of 800 patents.

Although most of Gearhart’s experience has been in hydrogen fuel cell and electric vehicle development, and Farrell’s career has focused on fuels and combustion, they both recognize that a broad portfolio of solutions is needed to maximize energy savings and emissions reductions.

“Industry gets the need to explore renewable opportunities, but companies might not agree about the best way to get there,” Farrell said. “Our unbiased research experts are able to identify and focus their efforts on the most promising R&D, pinpointing the technical, engineering, and scientific factors that determine whether a solution will be viable in terms of both mechanics and the marketplace.”

In addition to established leadership in R&D related to electric-drive vehicle technology, Gearhart and Farrell point out that the lab is pursuing alternative fuel, engine combustion, climate control, and infrastructure advancements, as well as pushing into new areas of exploration, such as connected autonomous vehicles.

Just as integrated systems will be crucial in furthering the sustainable transportation mission, NREL sees the continued integration of industry and research perspectives as vital to the success of its R&D in this area.

“If we are going to accelerate the widespread adoption of sustainable transportation technologies, we need to pull with industry to identify the most viable solutions, break down market barriers, and increase the competitiveness of that technology,” Gearhart said.

Farrell picked up the thread: “At the same time, without rigorous, independent research, those solutions aren’t going to take us where we need to go.”

NREL’s sustainable transportation R&D will continue to bridge the worlds of scientific research, technology development, and the marketplace — in the form of the lab’s approach to research, ongoing collaboration, and strategic hires.