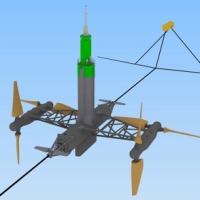 Oslo, Norway [RenewableEnergyWorld.com] The Harstad-based company Hydra Tidal will install a full-scale (1.5-MW) prototype of its tidal energy plant at Gimsøystraumen, a marine channel in Nordland County. The Morild floating power plant will be moored to the seabed and mostly submerged, with turbine wings spanning a diameter of 23 metres. However, its most unique feature is that its turbine blades are made of laminated pine.

Wood has not been used in modern turbine blade designs for decades. But company founder and R&D director Svein D. Henriksen extols the virtues of wood for such applications.

“Wood is a porous, homogenous material — so it has better mechanical and hydrological characteristics than today’s conventional materials such as composites and steel. The major challenge is the actual assembly process, but we believe we have found a good solution.” He points out that using wood in turbine blades is also an environmentally sound choice, especially in a lifecycle perspective.

Assembly, installation and maintenance are simpler for a floating facility than for one permanently anchored to the seabed. The Morild power plant can be assembled on land and then towed to its operating location for installation. It can also be detached and floated to the surface for repair.

Hydra Tidal is receiving funding for two different projects under the Research Council of Norway’s RENERGI programme. One project is studying Morild’s wood components at the Norwegian University of Science and Technology (NTNU) laboratories in Trondheim and will verify the company’s findings. The other project involves testing the effects of extreme environmental conditions on the entire Morild construction. The primary objective is to examine, test and analyse how such conditions affect a floating facility for converting the energy of slow coastal currents, tidal streams and ocean currents.

The projects will culminate in a full-scale test in the water in June 2010. The costs of developing the concept have totalled roughly NOK 125 million over the last 10 years, funded primarily by a large number of industrial participants and investors.

In the channel where Morild is to be placed at the end of June, the maximum current is 3.5 knots, with tidal periods of six hours, 20 minutes. The plant will start out generating a modest 1 GWh annually, but the testing phase is intended to focus on verifying the technology rather than on production levels.

“After testing, we will move the plant to Moskenesstraumen (a channel with tidal streams up to six knots), where its output will be stepped up considerably,” explains Mr Henriksen, who also has great ambitions for Morild internationally. “There are powerful ocean currents along many of the world’s coastlines, and foreign players have shown considerable interest in this project. At the moment we have patent applications being processed in about 20 countries.”

“Our objective is to develop this technology in close collaboration with Norwegian industry players in order to create jobs in Norway. This can be done, provided that there are conducive framework conditions for commercialising successful technologies.”

Although he is a proponent of establishing better commercialisation schemes in Norway, Mr Henriksen believes that funding for development should remain highly competitive. “That’s the only way to ensure that the winning technologies really are the best ones in the long run.”

Atle Abelsen/Else Lie are writers at The Research Council of Norway.  This article was translated from Norwegian by Darren McKellep and Victoria Coleman