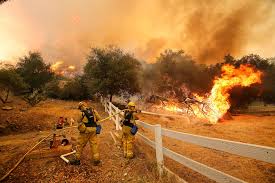 Active wildfires continue to burn across the U.S. state of California, most of them still only partially contained.

Just one of these, the Ranch Fire (Mendocino Complex) has burned 295,970 acres to date. This fire is in the Colusa, Lake and Mendocino counties and is 59% contained. It threatens more than 1,000 structures and has destroyed nearly 150 residences and more than 115 other structures.

Multiple news agencies are saying the Ranch Fire is the largest wildfire in California history.

Last week, the California Department of Forestry and Fire Protection (CAL FIRE) announced more than $170 million in grants have been awarded to more than 100 agencies and organizations across the state to prevent catastrophic wildfires.

These funds were provided by the Greenhouse Gas Reduction Fund for California Climate Investments.

Of these grants, 142 were awarded for fire prevention and 23 for forest health projects. Funded activities include hazardous fuel reduction, fire planning, and fire prevention education with an emphasis on improving public health and safety, all while reducing GHG emissions.

“Already this year more than 700,000 acres have burned across the state creating significant carbon releases that counter our efforts at reducing greenhouse gases,” said Chief Ken Pimlott, CAL FIRE director and California’s state forester. “Local projects funded by this money will prevent wildfires before they start, and when combined with our fire prevention activities, will help move us toward our greenhouse gas reduction goals.”

Many utilities own and operate hydroelectric facilities in the state, including Pacific Gas & Electric, which is lending support to wildfire response efforts.

We are unaware of any reports of dams or hydroelectric plants being damaged by the fires.

But California isn’t the only state experiencing problems with wildfires. In Washington State, a wildfire approached the 6,809-MW Grand Coulee hydro project, prompting Level 3 evacuation notices. Since then, the situation improved and reports indicate the hydro project and nearby community are no longer in serious danger.

Seattle City Light, a utility in Washington, developed a fire mitigation program to reduce risk at its hydro facilities and nearby communities.