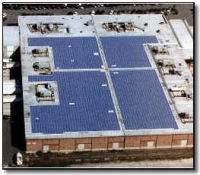 Under the backdrop of a PowerLight 1.1 MW solar photovoltaic installation dedication, the Long Island Power Authority (LIPA) marked the fifth anniversary of its historic acquisition of the Long Island Lighting Company’s electric system and its 20 percent rate cut by announcing that it would go beyond meeting the pledge to freeze base rates for five years and will hold base rates at their 1998 level for the remainder of this year and into next year.

Farmingdale, New York – May 30, 2003 [SolarAccess.com] Since May of 1998, Long Island’s electric consumers have saved over US$2 billion in electric costs when compared with the base electric rates Long Island Lighting Company (LILCO) had in effect prior to LIPA’s purchase of the electric transmission and distribution system on Long Island on May 28, 1998, according to LIPA. The average residential electric consumer has saved over US$1200 over the last five years. LILCO had the second highest electric rates in the nation. LIPA’s base rates rank 35th in the nation, according to information assembled by the U.S. Department of Energy. “Under LIPA, Long Island’s base electric rates are lower, service is more reliable, the electric supply has increased; more consumers are conserving energy than ever before, and the development and use of alternative energy technologies, such as solar, wind, geothermal and fuel cells is increasing,” said LIPA Chairman Richard M. Kessel. To underscore LIPA’s commitment to fostering the development and use of alternative energy technologies as part of its energy supply mix, Kessel, executives of the Fala DM Group and others dedicated the largest privately owned commercial application of photovoltaic (PV) technology in the world. The solar power system is larger than a football field and will produce over one million kWh of electricity annually – enough to power about 125 average-sized Long Island homes. The solar electric system was furnished by PowerLight Corporation of Northern California and employs 13,464 Shell Solar PV modules. At the same time, Kessel also announced that at Gov. George Pataki’s direction, LIPA will continue its commitment to energy efficiency and Renewable Energy by extending the LIPA Clean Energy Initiative (CEI) program for another five years, and increasing funding levels an additional US$5 million per year to an annual level of US$37 million, or a total of $185 million. “Thanks to Governor Pataki, New York State leads the nation in clean air technologies because they help protect our environment, create jobs and reduce dependence on foreign energy,” Kessel said. “LIPA’s Clean Energy Initiative, along with this exciting solar power project, demonstrates our continuing commitment to move toward using more Renewable Energy sources, and to encourage businesses to recognize the economic and environmental benefits of alternative energy technologies.” Located on top of three buildings owned by the Fala DM Group of Farmingdale, Long Island, the PV systems are the result of a joint effort between LIPA and Fala, and was partially funded through LIPA’s CEI program with a US$4.1 million research grant. The first and largest section of the expansive PV system, installed at Fala’s Daniel Street location, is now fully operational. Two other systems are currently being installed at two other Fala buildings on Marcus Drive. Fala will use the electricity to run a vast array of state-of-the-art computers and processing equipment needed for its direct mail business. The project will also reduce Fala’s peak load electricity demand by approximately 33 percent. Fala is a direct mail and business communications company. The 1.01 MW solar system was designed, manufactured and is being installed by PowerLight. It will reduce Fala’s energy bill by 10 percent. During peak summer demand periods, it will also help reduce peak demand on LIPA’s power grid. The Fala solar energy project, which will stand among the top five largest solar systems in the world, reflects what can be achieved through the foresight and partnering of the private and public sectors, said LIPA. “We’re also confident that we can hold LIPA’s base electric rates at their 1998 level through part of 2004, at the very least,” said Kessel. “That should be good news for consumers who have just experienced a winter that produced some of the highest prices for gasoline, home heating oil and natural gas in recent history.” “Back in April of 2001, none of us could have imagined just how critical cost containment and energy conservation would be,” said Fala Chief Operating Officer Stephen Paladino. “Following 9/11, which had a devastating impact on the economy in general and our industry, in particular, it became imminently clearer that taking bold steps to reduce our operating costs was critical. We saw the solar initiative as a primary measure toward that end. We also recognized its significance to important environmental and quality of life issues for our community.” Fala, decided to install the US$6.1 million solar system with LIPA agreeing to provide a one-time US$4.1 million research grant to help underwrite the capital cost of the system, and allowing LIPA the opportunity to evaluate the impact of such large renewable generating asset upon its daily grid operations. LIPA’s CEI was designed as part of Pataki’s plan to lower Long Island’s electric rates by an average of 20 percent through the takeover of LILCO’s retail electric business by LIPA. Through its CEI, LIPA has been actively engaged in developing the use of wind, solar, geothermal and fuel cell technologies as Renewable Energy resources for Long Island. To date, 78 electricians have attended the training sessions to learn how to properly install and maintain residential solar systems.