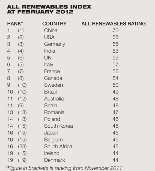 Clean energy’s prospects have faded fastest in the West, where Europe’s sovereign debt crisis has undermined its economy and scratched renewables from the political agenda. In the face of scarse capital and fierce Asian competition, Ernst & Young sees consolidation in the wind and solar sectors as ‘almost inevitable’. An increase in vertical integration as equipment manufacturers seek new routes to market is also viewed as likely.

But emerging markets continue to supply more than their share of good news. The divergent paths of Spain and South Africa illustrate the trend. Just five years ago, Spain was placed as the most attractive country for renewable energy. This year it has dropped out of the survey’s top 10 for the first time, slipping to 11th after its government temporarily suspended premiums for all new renewable plants.

Meanwhile, South Africa spotlighted opportunities in emerging nations by jumping up seven places to stand 16th in the chart. The country’s surge came after a very successful first round of a new tender bidding process totalling 1.4 GW of new capacity.

Among new markets, South Korea also climbed up one position to 14th after its government set ‘bold’ targets, especially in offshore wind. Romania and Ukraine were also rated higher in the index, mainly on account of their strong wind markets.

China stays at the top of Ernst & Young’s annual ranking, but the report sees ‘mixed signals’ in some developments. While the emerging superpower has raised its solar target to 15 GW by 2015 to soak up excess supply as global markets cool, its grid continues to extend a chilly welcome to generation from renewables.

China’s 12th five-year plan (FYP) raises the prominence of renewables, intended to meet 11.4% of total primary energy consumption by 2015 and 20% by 2020. Yet the outlook is brighter for hydropower and for biomass – planned to contribute 13 GW by 2015 – than it is for wind and solar.

The US retains its second place in the ranking in Ernst & Young’s analysis, assisted by a bumper year for wind in 2011 and the likely extension of the Production Tax Credit (PTC) support mechanism beyond 2012. A commitment to allow 10 GW of renewable power capacity to be placed on publicly owned land is another positive indication that suggests renewables are becoming embedded in the national power system.

Despite a 15% solar tariff cut, third-placed Germany has reinforced its commitment to renewable generation. Government development bank KfW recently launched an Action Plan Energy-Turnaround aimed at supplying 50% of external loans for a range of renewables projects. The latest version of the German Renewable Energy Law (EEG) enacted at the start of 2012 sets a requirement of 35% of generation from renewable by 2020, 50% by 2030, 65% by 2040 and 80% by 2050.

India kept its fourth place in the survey, with its place in the ranking buttressed by government plans to avoid costly solar FiTs and to move to an auction system for developers. India’s solar installations also showed encouraging progress, with 400 MW linked to the grid in the current fiscal year.

The UK edged above Italy to claim fifth spot in the index. Wind remains the country’s most promising renewable technology, with several large offshore wind projects in the pipeline including a 1.5 GW farm off Scotland. Yearly growth in UK offshore wind farms is expected to top 2.5 GW in 2016.

But the UK government is determined to cut solar PV tariffs, in the face of legal challenges, after 762 MW of capacity was installed last year.

The COP17 agreement in Durban to sign up to an unspecified legally binding treaty by 2020 was seen as ‘welcome but weak’ by the Ernst & Young report. The deal failed to deliver ‘an imperative to invest’.

Recession and the euro crisis have also combined to erode Europe’s carbon price, now at only €7–8/tonne. Certified Emissions Reduction certificates for cutting emissions in the developing world had also dropped to €3.28/tonne on the EU Emissions Trading Scheme (ETS) as the report was released.

National policymakers are wary of backing renewables against a backdrop of continuing recession and rising energy prices. The European banking sector also has a frozen its loan portfolio amid Europe’s sovereign debt crisis.

Spain dramatically withdrew support for renewables overnight in the face of a ballooning tariff deficit. The UK government has also cut back on solar PV tariffs while Germany has debated proposals to set a 1 GW annual capacity limit.

Shale gas poses a further challenge for achieving grid parity, setting the scene for a ‘low-margin’ decade in which Asian manufacturers gain market share while setting up partial assembly in the West.