The impact of the economic downturn that began in Q2 2011 is already being felt across the energy markets, including the renewable sector. While the sustainable industries saw an uptick in private equity and M&A deal activity in Q1 2011, with cleantech investments totaling $2.27 billion for the quarter, this surge was fueled in-part by spillover from deals that didn’t close during Q4 2010.

By the end of Q2 2011, it was clear that the renewable sector was feeling the effects of depressed economic conditions. During Q2 2011, North American cleantech investments totaled $1.42 billion over 113 deals, a year-over-year decrease of total invested capital of 10 percent from Q2 2010, and significant drop from Q1 2011 levels.

The faltering economy was not the only reason for the downshift in investment, however.  Q2 2011 saw rotation in the sector as money left the capital-intensive biomaterials/biofuels and solar sectors and began to move into the more capital efficient energy space.  As the impact of the economic downturn was felt across all sectors, enterprises increasingly sought ways to cut energy-related costs, and this new focus is responsible for turning the tidal flow of investment dollars in the sustainable sector.  While the effects of the current economic downturn will be felt across all sustainable industries, we expect that this shift in investment focus will generate new growth and activity through the remainder of 2011, and into 2012.

Driving the flurry of investment activity in the sustainable sector will likely be energy efficient mergers and acquisitions (M&A). As the economy struggles, large managed energy service providers are facing increasing demand from their enterprise customers for real-time energy management that will help reign in costs.  Developing this technology can be time-consuming, so many of these providers are looking to acquire the technology and/or value added services in order to rapidly meet the demands of their large client base.

This growing abundance of buyers means that mature, scalable energy efficiency technologies are set to become hot commodities.  The trend is further driven by the recent Schneider Electric purchase of Summit Energy Services for $268 million (priced at approximately 4X revenue), which has spurred competition among large managed service providers for the best energy efficiency technologies. Energy efficiency companies are likely to welcome this wave of suitors, as the barriers to entry into the market, both from a regulatory and sales perspective, are extremely high.

Solar power has also been a driving force in the sustainable sector through Q1 and Q2.  The sector has a stronghold on market share as a percentage of renewable energy generation, and we expect solar projects to continue to outperform wind projects and to garner an increasingly large share of the renewable energy mosaic.  Solar projects continue to be driven by geographic location and local- and state-level incentives, and the growth rate of new installation continues.   Solar projects do not have the same environment impact as wind farms, and is a more accessible technology.  We believe that both utility scale and distributed generation projects will see continued growth and investment activity through the second half of 2011.

Despite strong growth potential, we expect energy prices to decline in the second half of 2011 as the economy slows.  Energy prices are economically sensitive, and prices will start to drop across all sectors, from traditional sources such as oil, to sustainable sources including wind and solar, as the effects of the economic downturn are felt.  We believe that oil will come down to well under $100/barrel, and electricity usage will show a quarter over quarter decrease from Q2 to Q4.

The drop in energy prices is also likely to drive interest in new sustainable areas.  While the world has long been focused on the scarcity of oil, as the price of oil comes down, water will become the new resource of concern.  There are several factors contributing to this.  As the world’s population approaches the seven billion mark, the potential for future water shortages looms greater.  Additionally, energy resource harvesting practices, such as coal mining and natural gas fracking, have both created significant water pollution in affected areas, further compounding the growing crisis of access to potable water.

In summary, we expect the following four themes to dominate the majority of activity in sustainable industries through the remainder of 2011, including: 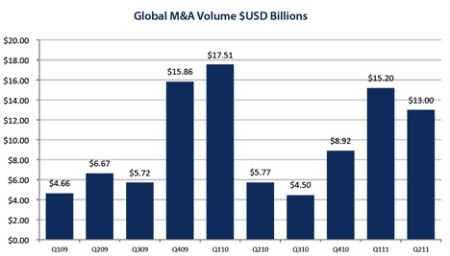 There were 86 M&A transactions in Q2 2011, of which 31 deals were disclosed for a total of $13 billion.  This deal total was down compared to 140 transactions totaling $15.2 billion in Q1 2011. While this quarter’s figures may on the surface represent a slowing of momentum in the M&A markets, we think the downward adjustment was more a function of the robustness of the Q12011 activity and that the Q2 2011 numbers indicate more of a steady state environment.