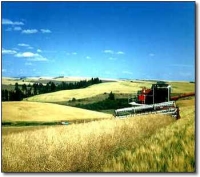 Washington D.C. [RenewableEnergyAccess.com] Few issues on Capitol Hill are as easy for both sides of the aisle to support than a renewable fuel standard. Just in time for possible inclusion in comprehensive energy legislation, a bipartisan group of 22 representatives introduced a new renewable fuels standard that would likely double the current production of domestic biofuels like ethanol, biodiesel and celluosic biomass fuels.

Representatives Tom Osborne (R-NE), Stephanie Herseth (D-SD), Collin Peterson (D-MN), and Steve King (R-IA) introduced The Fuels Security Act of 2005. The measure mirrors the Senate version of the Renewable Fuels Standard found in S. 650, which was introduced last month by Senators Harkin and Lugar, and sets a national renewable fuel standard of 4 billon gallons by 2006 and 8 billion gallons by 2012. The target would more than double the current production numbers. The bill also contains an escalation clause that allows the renewable fuel requirement to be expanded beyond the life of the schedule based upon an overall review of the program. Finally, the legislation provides an important foundation for establishing ethanol plants in new regions of the country that are expected to produce ethanol from non-traditional cellulosic feedstocks. The original Renewable Fuels Standard, introduced four years ago, called for 5 billion gallons of ethanol to be used annually by 2012. With ethanol production in the U.S. increasing at a rate of over 600 million gallons per year and the industry poised to produce 4 billion gallons by 2006, enacting a more ambitious schedule for ethanol demand will better reflect the current growth of the industry. If enacted, this legislation will spur production of biofuels in all regions of the country that use a variety of feedstocks, and stimulate investment and rural economic development. “Ethanol production in the U.S. is expanding at a remarkable rate, with most of the growth led by farmer- and locally-owned ethanol facilities. At a time when cuts to the farm bill are being considered, this new, more ambitious RFS proposal represents a beacon of hope for rural America,” said Brian Jennings, Executive Vice President of the The American Coalition for Ethanol. At a time when the U.S. trade deficit in February reached a record $61 billion, two thirds of the increase in imports was attributed to petroleum and petroleum products, according to the DC-based Environmental and Energy Study Institute (EESI). In 2004, $166 billion of the U.S. trade deficit was from oil imports alone. At a press conference led by Rep. Herseth, Members outlined other benefits a shift from petroleum to biofuels could have for the country. Rep. Herseth said the rapid adoption of a national renewable fuels standard was a “national issue with growing support.” Rep. Tom Osborne discussed some potential wide-ranging impacts of the legislation: a $51 billion increase in income to farmers, the significant decrease in farm payments that will result, the $200 billion that will be added to U.S. GDP, and the overall 20 cent decrease per gallon of gasoline due to the adoption of ethanol blends. He emphasized that this legislation is not just geared for farmers, rather, “it certainly benefits every American.” Rep. Mark Kennedy asked, “How high do our energy prices need to get, before we act? How long will we let our trade deficit grow before we do something?” Certainly, the current price per barrel of oil hovering above $57 begs that precise question. Original co-sponsors of the bill include: Representatives Marion Berry (D-AR), Earl Pomeroy (D-ND), Sam Graves (R-MO), Leonard Boswell (D-IA), Betty McCollum (D-MN), Ike Skelton (D-MO), Mark Kennedy (R-MN), Marcy Kaptur (D-OH), John McHugh (R-NY), Jeff Fortenberry (R-NE), Jerry Moran (R-KS), Jim Leach (R-IA), Jim Ryun (R-KS), Ted Strickland (D-OH), Tom Latham (R-IA), Ray LaHood (R-IL), Julia Carson (D-IN), and Mike Pence (R-IN).