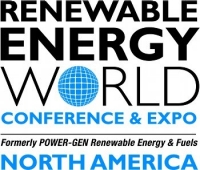 Nevada, United States [RenewableEnergyWorld.com] Next Tuesday in Las Vegas renewable energy industry leaders, experts, companies and other interested participants will meet in Las Vegas to discuss how the industry is faring amidst the current economic conditions during Renewable Energy World North America, the renewable energy’s leading expo and conference in North America.

The show kicks off with a keynote round-table session that will set the stage for the 3-day event. During the session, leaders of the major renewable industry trade associations plus a senior executive from host utility NV Energy will take part in a round-table discussion on the economy, the economic stimulus bill and renewable energy initiatives likely to come from the Obama Administration and Congress. These individuals have their fingers on the pulse of their respective industries and should be able to shed light on the most current insights into what the next four years may hold for the industry.

Confirmed as taking part in the keynote session are:

On an interesting side note, today the Women’s Council on Energy and the Environment awarded AWEA CEO Denise Bode as Woman of the Year.

The keynote round-table session occurs from 3-5 pm on Tuesday, March 10th and immediately after it the exhibit floor will open for two days of product demonstrations, business negotiation and networking involving all forms of renewable energy.

“There is no better time to be involved in the renewable energy industry. We are excited to welcome our renewable energy association partners to help us kick off our sixth Renewable Energy World North America show with what promises to be a dynamic and must-attend keynote,” said Richard Baker, Senior Vice President Power Generation Group for PennWell Corp., which owns and produces the show.

The editors and writers at RenewableEnergyWorld.com will be there shooting video of the event and conducting interviews with key industry players. Contributing writer Mark Braly will be attending show sessions and reporting back to us on topics such as finance, community markets, biopower applications and more.

We’ll also sit down with Clint Wilder a RenewableEnergyWorld.com contributor and contributing editor at Clean Edge who will be unveiling Clean Edge’s Clean Energy Trends 2009 Report.

News editor Graham Jesmer will be talking with attendees and exhibitors about the current state of renewable energy financing and how the U.S. stimulus package might help in the short term.

Staff reporter and podcaster, Stephen Lacey will be leading his own a round-table on the state of the U.S. and international hydro industry. Plus, he’ll be speaking to a variety of companies throughout the renewable energy space on new technologies and market trends.

In light of the expected surge in green job growth over the next few years, Renewable Energy World.com will be unveiling its brand new onsite Job Wall, which is designed to give employers a high-profile location to display jobs and give job-seekers a place to see which companies are planning for growth.

The Job Wall will be located on the show floor and is made up of two 6-foot walls that feature job postings from a vast array of employers over a number of different renewable energy industries. In addition to being posted on the wall, job openings will be printed and distributed to show attendees.

Katharine Hart, online job sales manager at REW.com believes that by mid- to late-2009, jobs in the renewable energy industry will pick up dramatically. “While some companies may have delayed their growth plans in reaction to the current economic situation, I am hearing that they do plan to hire as soon as the U.S. stimulus package begins to take effect.”

“If Obama’s plan works, this industry should really take off in the coming years,” she said.

It just so happens that Renewable Energy World North America kicks off a busy renewable energy show season. While we didn’t have room to list them all, some are included here: