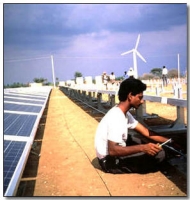 New Delhi, India [RenewableEnergyAccess.com] Renewable energy options are more than just a choice for the affluent or “green” thinking people of India. For years now, remote villages have relied on wood stoves and diesel generators to provide heat and electricity.

Efforts to increase the use of energy through solar, wind and biomass sources in remote areas have put the nation at the forefront of renewable power use, but the government has only recently proposed a renewable energy standard for the nation. A press release on the Web site for the Press Information Bureau (PIB) in New Delhi outlines the renewable resources that are currently utilized in India, and the Government’s Common Minimum Program to establish enough renewable energy sources to electrify all India’s villages by 2010. Under the program, an additional 4,000 MW of power from renewable sources would be added to the nation’s current power generation by 2007, and the government has set a goal of elevating the share of renewable energy sources to 10 percent by 2012. Currently, according to the Bureau, renewable energy contributes about 5,000 MW of the nation’s power needs. That is only 4.5 percent of the total installed generating capacity from all available power sources in India. Wind power alone accounts for 2,483 MW, which makes the nation’s wind energy program the fifth largest in the world. The features of wind energy that make it attractive are zero fuel costs, and quicker benefits and usefulness for sustainable economic development. Gross wind energy potential in the country is estimated at 45,000 MW, and the states with high wind power potential are Tamil Nadu, Maharashtra, Gujarat, Andhra Pradesh, Karnataka, Kerala, Rajasthan and Madhya Pradesh. Biogas, which consists of 55 percent to 70 percent methane gas, is a clean replacement for diesel fuel and accounts for 613 MW of power generated annually. Many rural households use a decomposed mix of cattle dung and leafy biomass in place of fuel oil for cook stoves, lamp oil for lighting needs and engine oil in dual-fuel generators for electricity. Biomass is also used in improved Chulhas, which are simple wood-burning stoves designed for optimal regulation of heat and better fuel utilization. India consumes 200 to 300 tons of fuel wood, 80 to 100 tons of animal waste and 100 to 120 million tons of crop residues annually. The government is planning community based planting programs using fast-growing, oil-bearing trees that would provide power for approximately 25,000 remote and 175,000 forest-fringe villages. Small hydroelectric projects contribute to 1,603 MW annually, and the country has a potential for 10,071 MW of hydroelectric power, according to the Bureau. A government sponsored Small Hydro Power (SHP) program promotes small-plant commercialization and active private sector participation in 25 MW projects. Solar energy use of both thermal and photovoltaic (PV) technologies has grown over the last two decades, and India has the largest decentralized solar energy program in the world with over 1 million households identified as using a PV array. PV systems are also used in agricultural settings, telecommunications networks and railway systems. The government’s Common Minimum Program is considered a viable option to achieving sustainable development goals in India. Power generation from renewable energy sources is significant when the environmental hazards caused by the excessive use of fossil fuels are considered. Wide use of renewable energy technologies has created a substantial manufacturing base, and placed India in a position to export technologies as well as offer technical expertise to other countries. According to the Bureau, however, the renewable energy program in India needs more support from the central and state governments. Renewable energy should be categorized and declared as a priority sector. The country needs a Green Power Policy based on the benefits a policy could offer to both new investors and those who have already invested in renewable energy projects. Information in the release from the India Press Information Bureau was provided by freelance writer E.C. Thomas.