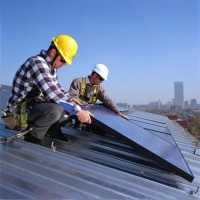 Colorado, United States [RenewableEnergyWorld.com] The renewable energy and energy efficiency (RE&EE) industries represented more than 9 million jobs and US $1.04 trillion in U.S. revenue in 2007, according to a new report published by the American Solar Energy Society (ASES). The renewable energy industry grew three times as fast as the U.S. economy, with the solar thermal, photovoltaic, biodiesel, and ethanol sectors leading the way, each with 25%+ annual revenue growth.

“There’s a new sense of optimism in the green economy,” said Brad Collins, ASES’ executive director. “But while the U.S. could see million of new jobs in renewable energy and energy efficiency, this will only happen with the necessary leadership, research, development, and public policy at the federal and state levels.”

According to the advanced scenario in the report, which represents the upper limit of what is technologically and economically feasible, RE&EE would generate about 37 million jobs and US $4.29 trillion in annual revenue by 2030. It’s one of three forecast scenarios highlighted in this report.

Under the base case (business as usual) scenario, which assumes no major change in policy or initiatives, the green job forecast is for more than 16 million jobs and US $1.9 trillion in revenue in the U.S. by 2030 – less than half the jobs and revenue than the advanced scenario. The third scenario assumes moderate policy improvements at the federal and state level and forecasts 19.5 million jobs and US $2.24 trillion in revenue by 2030.

Key conclusions from this report include:

The ASES Green Collar Jobs report was conducted by Management Information Services Inc. For more information and to download a copy of the report, click here.