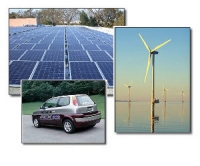 2004 was a banner year for renewable energy! PV production capacity reached the 1GW mark; Global Wind Power continued to blow at hurricane strength — even with a downturn in the U.S. market; Bioenergy gained critical momentum powered largely by biodiesel; Ocean Energy moved from a few ripples to serious swells in Europe and the U.S.; Clean Energy purchases became synonymous with sustainable business practices; and lots more…whew! Today, read the last installment of our four part series presenting our choices of 2004’s top news. As always, please add your comments and opinion to our interactive Reader Comments at the close of this review. What was your top story?