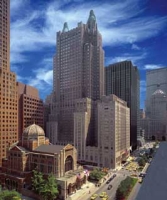 New York, New York [RenewableEnergyAccess.com] Despite its government’s slow action on the issue of climate change, the U.S. financial community has done what it has always done so well, and that is pour money at an opportunity, i.e., the renewable energy sector. That was just one of the messages heard by the nearly 700 attendees during the 4th Annual Renewable Energy Finance Forum (REFF) Wall Street last week.

Welcoming everyone to the “great renewable technology intersection” of markets, projects and people, American Council On Renewable Energy (ACORE) President Michael Eckhart addressed an audience of financiers, corporate executives, project developers, and financial professionals during his opening remarks on the state of the renewable energy industry at New York City’s Waldorf-Astoria on Park Avenue.

“There are a lot of trends and they’re very subtle but we’ve seen them,” said Eckhart, commenting on 2008 investment trends in an interview with Inside Renewable Energy Podcast host Stephen Lacey at REFF last week. “The big themes here are global industry, global markets. We still have domestic finance, a little bit of global finance. But the trends are all up. There’s no decline in any of these markets. There’s very strong valuations in the capital markets,” said Eckhart.

Day one featured a number of sessions specific to solar, wind and biofuels industries. With respect to biofuels, the buzz during REFF was that debt restructurings seemed imminent as corn prices continue to rise and ethanol prices drop—causing some shaking of hands over what was once margin positive, and now has become margin negative.

“Biofuels has taken a hit on their stock prices and maybe for good reason as the margins eroded as corn prices increased,” stated Eckhart. “But in solar, wind, the valuations are quite strong and they seem to be well supported by the marketplace. All the trends here are very positive, there are a couple signs for caution, like interest rates and margins, but this is a very healthy industry right now.”

The convergence of price, efficiency and energy costs in the global solar industry seems bright overall. But competition in the 8.5-gigawatt/$40 billion industry will be fierce in the future as illustrated by Dr. Yuan-Huai Simon Tsuo, CEO of Motech, who showed a slide of their latest multi-megawatt (MW) plant in China.

However, on the same panel, Alf Bjorseth, Chairman of Scatec AS, talked about their ability to lower the melting point of silicon by using nanocrystals to significantly improve efficiencies. With Motech’s employee commitment and Scatec’s improving technologies, one could almost feel grid parity.

The wind panel discussed the industry’s exponential rise, which exceeded expectations for growth around the world as global installed wind energy capacity reached 74,223 MW in 2006. Despite supply constraints, and while the panel agreed the fast growing wind industry may encounter more limitations in the future, sustained growth has been maintained across the sector, culminating in a market increase of 32% over 2005.

This reiterated the obvious as Dan Reicher, Director of Google.org, so rightly quoted from U.S. Department of Energy Secretary Samuel Bodman’s earlier speech: “The cheapest energy is the energy we waste.”

For more on REFF, listen to this week’s Inside Renewable Energy Podcast.

Robert Preston, Portfolio Manager with Merrill Lynch Global Private Client Group, has over 30 years of experience in finance, energy research and renewable energy. Prior to Merrill Lynch, he held senior positions with Paine Webber, L.F. Rothschild, Union Bank of California and Nomura, most recently acting as President of AXA Investment Managers New York. He is also an acting board member with the Northeast Sustainable Energy Association (Chair of the By-Laws Committee), Darragh Company, BusinessWeek Energy Series and the Dover Land Trust.