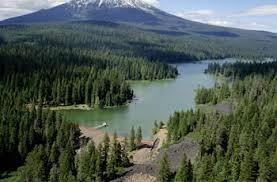 Modifications to Hyatt Dam near Ashland, Ore., will begin in early June and be completed by the end of November, according to a May 24 announcement from the U.S. Bureau of Reclamation, which said it awarded Alaska-based Suulutaaq Inc. a construction contract in April for US$4.4 million.

“This construction project is necessary to limit the risk of internal erosion in the dam,” said Reclamation’s Acting Commissioner, Alan Mikkelsen. “Reclamation has worked diligently on the safety and function of our dams. This work will enable Hyatt Dam to continue to provide irrigation and recreation to the area for many years to come.”

Hyatt Dam, located on Keene Creek about 27 miles southeast of Talent, was constructed in 1923 by the Talent Irrigation District (TID) and impounds Hyatt Reservoir for water storage.

In 1960, Reclamation modified the dam, constructing fish screens and recreation facilities as a part of the Talent Division.

The Associated Press reports the dam, which Reclamation owns but is operated by TID, will undergo a seismic retrofit to bring the dam into safety compliance after a seepage issue was discovered during a 2009 inspection.

Also in 2009, the Bureau of Land Management in its Environmental Assessment for Little Hyatt Dam said, “Based on the dam’s height, impoundment volume, and the downstream development, a hazard rating of ‘low’ was assigned to the dam. Regardless of the rating, a sudden release of water resulting from a dam failure poses some risk to public recreating downstream as well as facilities (trail and road), and private property and structures. In addition, a sudden discharge of water has the potential to affect the Keene Creek Reservoir and the hydroelectric generating facility downstream.”

The 17.29-MW Green Springs hydropower plant, built in 1960, is downstream and part of the Talent Division of the Rogue River Basin project.

In April, HydroWorld.com reported Oregon House Bill 3427 requires owners or operators of dams with a “high hazard” rating to develop an emergency action plan, including determining the frequency for conducting emergency response exercises.

In 2013, Reclamation awarded a US$45.7 million contract to Suulutaaq Inc. for dam safety civil construction at the Mormon Island Auxiliary Dam – part of the 198.72-MW Folsom Dam hydroelectric project on California’s American River.

Suulutaaq Inc. is subsidiary of The Kuskokwim Corp. (TKC) and it provides civil construction, restoration and construction management services. TKC is part of the 13 Alaska Native Regional Corporations the U.S. government established in 1971.