Setting aside momentarily the many and varied opinions about what is or is not practical, the only real reason anybody would NOT want the people of this good earth to get as much of their energy as possible from the infinitely renewable resources of the sun, the wind, the crust’s deep heat and the rivers’ and oceans’ flowing waters is because they have vested interests in the toxic and destructive energy businesses.

What they mean, of course, is that the infrastructure to capture the solar and wind assets is inadequate. Funny thing about that: In the 1970s, when international tensions led to oil embargoes, oil shortages and gasoline lines, some very farsighted people said it was time to turn to the sun and the wind. Guess what the wise men of the fossil fuel industries said in reply? The wind and the sun are wonderful but there is not enough of them. So now, when the pioneers of today’s New Energy industries hear such shortsighted, self-serving drivel, they put their heads down and redouble their efforts to build and plan.

The dedicated work of the New Energy industries over the last decade is paying off. Phase 1 Report: Strategic Midwest Area Renewable Transmission (SMARTransmission) Study, from Quanta Technology for American Transmission Co., Exelon Corp., NorthWestern Energy, Xcel Energy, MidAmerican Energy Co. and subsidiaries of American Electric Power and MidAmerican Energy Holdings Co., proves it. These power companies and utilities, the people who bear the enormous responsibility of keeping the lights turned on and the A/C running, are making plans to build new wires to carry the new gigawatts of wind and the sun power now becoming a part of the nation’s electricity supply.

The essence of the report: This ad hoc consortium of electricity producers and utilities, powerhouses in a conservative economic sector, are being told by their own research group that there are at least 3 practical transmission plans through which the heartlands (North Dakota, South Dakota, Nebraska, Minnesota, Iowa, Missouri, Wisconsin, Illinois, Indiana, Michigan and Ohio) can bring online 56 more gigawatts of wind energy capacity and thereby meet a proposed national Renewable Electricity Standard (RES) requiring regulated utilities to obtain 20% of their power from New Energy sources. ::continue:: 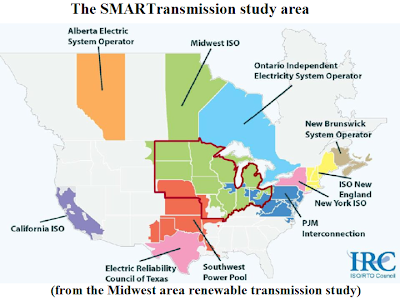 In some advocates minds, these powerful corporations’ sudden interest in the New Energies raises a question: Is this a change of heart or an end run? Do they really think the sun and the wind are their future or are they using them as an excuse to build new wires that will ultimately do more for the centralized power plants of the Old Energies than they will for the New Energies’ more distributed generation?

Some of the most passionate of New Energy advocates, among them folks who have dedicated their lives to stopping the proliferation of coal plants, believe any new transmission that gets built using the excuse that it is needed to carry New Energy will ultimately be used to carry fossil fuel-generated electricity produced along with the spew of greenhouse gases.

“…The idea is for someone, anyone, other than the project proponents to pay…other than those owning the infrastructure to pay…” wrote attorney Carol Overland about a proposal for expanded transmission purportedly dedicated to wind in Minnesota at No CapX 2020, “[and it’s] not wind, it’s electric generation connecting to the grid, be it wind, coal or whatever! Transmission service providers must be open to all, wind, coal, hydro, nuclear…”

The more activist, grassroots and local organizations tend to side with Overland and view the motives of the big power producers skeptically. Until the MRI is invented that sees into the human heart, motives will remain unknowable and the question of these companies’ intentions will be one of the most important unanswered questions confronting the community of New Energy advocates. The ultimate proof will be not in what wires they are interested in but in what kind of energies they back.

More details at SMARTransmission and No CapX 2020 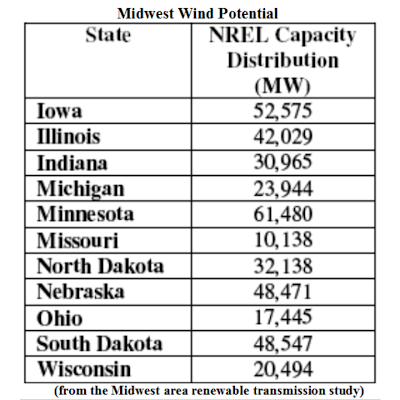 This post is based on First Phase Of SMART Study Addresses Electric Transmission Options For Midwest (2 July 2010, Renew Grid)