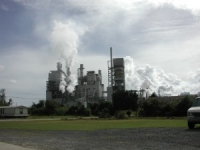 Georgia, United States [RenewableEnergyWorld.com] The pulp and paper industry is uniquely positioned to immediately produce significant amounts of biofuels, bioenergy and bioproducts. With a mature, operating infrastructure capable of delivering double-digit billions of gallons of biofuels annually, generally without adding any new fiber processing capacity, many pulp and paper mills around the world are only a one-step investment away from becoming major renewable energy producers. Especially important, paper industry capacity that can be re-aligned and re-purposed toward bioenergy co-production would be 100% cellulosic feedstock based, with no agricultural attachments at all.

Pulp mills are ideal sites for integrated biorefinery operations for four basic reasons. First, they are already set up to receive and process massive amounts of delivered roundwood and woods chips, served in this capacity by rail, truck and some also by barge operations. In the U.S. alone, pulp mills use more than 120 million dry tons of wood per year, and they have access to at least an equal amount of forest residuals and even a greater amount of agricultural wastes and energy crops if needed.

Second, these mills have basically the same existing infrastructures for warehousing and shipping out finished products around the country. Third, they have a well-established in-place administrative infrastructure and related human resources that can be extended to serve a biorefinery business without incurring significant new costs. Fourth, pulp mills have operating utility support systems for process water, electricity, steam and waste/environmental treatment that can easily be umbrella’d to support biorefinery operations without major new investments.

And possibly as a strong fifth reason, chemical pulp mills already operate as biorefineries of sorts, producing fiber used to make paper and paperboard as well as some specialized dissolving pulps used to make viscose types of “bio-plastics” and rayon materials. Bio-byproducts made from sulfate (or kraft) spent cooking liquors (black liquor) include ingredients used in making coatings, adhesives, detergents, paint, varnish, ink, lubricants, waxes, polishes, gasoline additives, agricultural products, etc. Turpentine is obtained by condensing exhaust vapors during the pulping of softwoods with the kraft process. There also is a spectrum of lignin-based byproducts produced from refinement of black liquors.

This same black liquor that, in fact, after it is thickened through evaporation and the byproduct streams removed, is currently used as a “fuel” to fire what are known as chemical recovery boilers, so named because their initial, primary purpose was to burn the hemicellulose/wood sugar content of the thickened, spent cooking liquor, resulting in a char bed deposit that can be regenerated backing into fresh cooking liquor chemicals. Heat from the combustion process is used to co-generate steam used in the process and electricity via turbo-generators. Today’s mills produce on the average 60% of their power from wood residuals and spent pulping liquors.

Rather than burning these high volumes of spent cooking liquors directly in recovery boilers, integrated biorefineries can process them into an array of value-added cellulosic biofuels, including ethanol, various synthetic gases (syngas), synthetic crude oil and biodiesel. These fuels could be used to offset petroleum-based fuels being burned in the mill and/or to sell as transportation/motor fuels.

There are as many as 12 clearly defined pathways into integrated biofuel/bioproduct production at pulp and paper mills. These include the thermochemical approaches that generally involve gasification of either biomass and/or spent cooking liquor streams alone or in combination with advanced gas-to-liquid technologies such as Fischer-Tropsch-based systems, and various pyrolysis techniques involving fluidized bed boilers.

Other pathways involve established sugar platforms and value-prior-to-pulping (VPP) approaches, where hemicellulose content is extracted before cooking of wood chips in digesters in various ways, such as cooking in pure water to produce a “prehydrolyzate” that can be fermented to mixed alcohols or gasified to produce a syngas.

The American Forest and Paper Association (AF&PA) recently conducted a detailed study of the most feasible routes to integrated biofuel production at pulp and paper mills, versus stand-alone cellulosic biorefineries, as part of its Agenda 2020 program. This study is detailed in a two-part series of reports just completed in the July issue of Paper360° magazine, the official publication of TAPPI (the Technical Association of the Pulp and Paper Industry) and PIMA (the Paper Industry Management Association).

A committee of Agenda 2020 CTO’s, representing 90%-plus percent of chemical pulp producers in the U.S., evaluated four general pathways that appear to be most likely for chemical pulp and paper mills based on existing infrastructures and operations. This study focuses basically on thermochemical approaches as being the most feasible, and looks generally at four related pathways.

The business case discussed in the AF&PA report is based on a post-2010 gasification biorefinery operation at a kraft pulp and paper mill as described in a recent report by Princeton University. The reference mill is in the Southeastern U.S. and produces 1,580 dry tpd of kraft pulp using a 65/35 mix of hardwood and softwood.

The main economic benefits of biorefining in the cases outlined by AF&PA for this reference mill include additional revenues from sale of synthetic fuels (511 tpd of dimethyl ether to be used as an LPG (propane) blend stock, or 2,362 barrels per day of petroleum equivalent or 4,757 barrels per day petroleum equivalent of Fischer-Tropsch synthetic crude oil for refining to diesel and gasoline blendstocks at petroleum refineries), as well as a savings of 226 tons per day of pulpwood due to increased pulp yield, and slightly overall lower steam use.

Considering that there are 200 or more similar chemical pulp mills in the U.S., and at least an additional 100 in Canada, basic arithmetic shows this barrelage capacity for Fischer-Tropsch synthetic crude oil could total somewhere upwards of 420 million barrels per year, or between 15 and 20 billion gallons per year for the entire North American pulp and paper industry, based on existing infrastructure and operations only, without adding any new capacity.

This is a very significant potential considering that the President’s 2007 renewable fuel standard (RFS) is 36 billion gal/yr by 2022, and that at least 21 billion gallons of this are to be obtained from cellulosic ethanol and other advanced biofuels. This clearly indicates that the forest products industry, and pulp and paper mills in particular, are in a very unique position to help meet this critical national challenge.

These issues, and specifically the AF&PA position paper study, will be explored in considerable detail at the TAPPI International Bioenergy and Bioproducts Conference (IBBC) to be held in late August in Portland, Oregon.

The 2008 Technical Conference Program features 14 sessions that will take attendees through an in-depth analysis of where the industry currently is on the biorefinery front to where it will be in the next five years and beyond. A key issue underlying all sessions is the immediate need to attract investment community involvement on an on-going basis. The intensive program explores not only the latest biorefinery technologies, but also developing markets and the legal-legislative-investment sides of the bioenergy/bioproducts equation

The IBBC program includes several sessions that examine biorefinery approaches already in commercial operation, with from-the-field updates by those “already doing it.” Systems technologies being reported in these sessions cover pyrolysis, gasification/gas-to-liquid, acid hydrolysis, enzymatic, and other fermentation-based approaches.