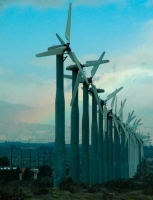 Washington, DC, United States — It appears that the feverish work performed by the American Wind Energy Association (AWEA) and the Solar Energy Industries Association (SEIA) has resulted in a compromised tax credit extenders bill that includes a one-year extension of the Treasury Grant Program (TGP), which allows developers to receive a 30% investment tax credit in the form of a grant for their renewable energy projects.

The new bill was introduced in the Senate yesterday and a vote is expected on Monday.

The two associations have been calling for the extension of the TGP because it has spurred the development of more than 1000 solar energy projects across the nation and numerous wind projects as well, keeping Americans at work, say the organizations.

Rhone Resch, President of SEIA said in a statment:

“An extension of the program will keep our U.S. industry growing and help achieve the industry’s goal of installing enough new solar energy to power 2 million new homes each year by 2015. None of this would be possible without the tireless leadership of solar’s champions on Capitol Hill on both sides of the aisle. In particular, Senators Cantwell, Feinstein, Ensign and LeMieux stepped up to support American jobs in the renewable energy industry and helped convince the Senate to include this provision in the final bill.”

Resch urged lawmakers to pass the bill as soon as possible. “But this is not over yet. Congress must now move swiftly to pass this compromise bill and keep solar working for America,” he said.

“This is a great day for American workers,” Bode said. “We have a lot of work to do to ensure that this victory is upheld in the House and Senate, and signed by the President, but we saw an outpouring of support this week that was truly inspiring.”

Should the measure pass, Bode is hopeful that the wind industry will surge ahead.  “Factories across the country will restart production lines, recall workers, and avoid layoffs that would have followed the loss of this key incentive for wind energy. With consistent policies like this one, wind energy can generate 20 percent of America’s electricity within 20 years, and employ half a million Americans,” she said.

Left out of the bill was the advanced energy manufacturers tax credit.