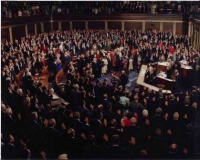 Washington, DC [RenewableEnergyAccess.com] Last Friday the U.S. House of Representatives, in an unusual move, extended the final week of its session into Saturday in order to finish debate on vital legislation before recessing for the summer. The outstanding business included two crucial bills affecting renewable energy development in the U.S.

The bills, HR969 and HR2776, had been slated for debate in the final week of the session but were in danger of being elbowed out by the sheer pressure of other business, including health care, ethics and agriculture. HR969 is designed to create a national renewable portfolio standard (RPS) for electricity production, while HR2776 will extend through 2012 the tax credit for the production of electricity from renewable resources.

These bills, amendments to the larger Clean Energy Bill passed in June, are considered by many observers and industry experts to be vital to kick-starting the growth of clean energy production. The final vote tally on the overall bill was 241-172.

In an effort to garner broad support for HR969 legislators recently modified the language of the bill, which originally specified that utilities would have to provide 20% of their electricity from renewable sources by the year 2020; this target figure has now been reduced to 15%.

“A 15% federal standard brings even more support from diverse regions of the country, further demonstrating the broad support for establishing the first ever federal standard of this kind,” said Representative Tom Udall (D-NM), co-sponsor of the bill.

The RPS legislation was further modified toward the end of last week to split the 15% requirement into two parts: at least 11% for renewable sources, and a maximum of 4% for energy efficiency. This latter figure imposes a quantifiable responsibility on utilities to help users of electricity, particularly large industrial customers, to use it more efficiently.

Only 26 Republicans voted for the overall bill. Ralph Hall, a Texan Republican, complained of a war being waged against fossil fuel energy. “I can’t understand the pure venom felt against the oil and gas industry,” he said.

Utilities and other business interests were also opposed to the RPS legislation, arguing that it would raise electricity prices in parts of the country with poor wind resources. Rep. Udall disagreed, noting that half the states already have a renewable energy standard in place.

Speaker of the House Nancy Pelosi, who insisted that these measures be passed before the House recessed, was uncompromising in her comments, saying that “energy independence is a national security issue, an environmental and health issue, an economic issue, and a moral issue. This bill will send our energy dollars to Middle America and coast to coast, not the Middle East. This bill lays out specific steps the Administration should take for the U.S. to resume a constructive role as the global leader in combating global warming.”

With the Senate version of the legislation already complete (but lacking an RPS or solar tax credit provisions), passage in the House leads to a conference committee stage in the fall and possible final passage of a reconciled bill in late October or early November. That bill may also contain language mandating greater fuel efficiency in motor vehicles and increased use of corn-based ethanol in gasoline.

The Bush Administration, however, was reported last week to be threatening a veto of the Energy Bill.

Marissa Padilla, press secretary to Rep. Udall, expressed her disappointment at the prospect of a veto.

“When there is such strong bipartisan and popular support for a bill, and such a need today for clean energy solutions, it would be terrible for the Administration to simply maintain the status quo,” said Padilla.

Marchant Wentworth of the Union of Concerned Scientists agreed that a presidential veto would be a retrograde step. “But the bill is very popular with the people, and we’re optimistic that it will survive a veto,” he said.

If enacted into law, the RPS will be 2.75 percent by 2010, gradually increasing thereafter to meet the 2020 goal. Suppliers can meet these requirements by purchasing credits from other entities who have obtained credits by producing renewable energy. It also allows utilities to bank credits for three years, and to borrow credits from up to three years in the future.

Chris Stimpson is the executive campaigner and activist for the Solar Nation advocacy group solar-nation.org. In addition he serves on the Board of Directors of Clean Power Now.