MILAN — Pigs haven’t yet flown when the wind blows hard in Germany, but when considering unlikely scenarios, prices on the wholesale day-ahead spot market for electricity have plummeted to -500&€/MWh, while more than 700 km to the south, water flows uphill in the Austrian Alps.

Germany’s long-term commitment towards increasing its share of power from renewable energy sources (RES) through policies like generous feed-in tariffs (FiTs) has shown remarkable results. Preliminary estimates for 2011 from the Federal Environment Ministry show that RES accounted for 20 percent of German electricity supply and 12 percent of the total energy supply in 2011. Wind energy was the major contributor, accounting for 7.6 percent of German electricity production. Germany, with 29,075 MW of installed capacity, accounts for 12.2% of 2011 global wind generation capacity, according to the Global Wind Energy Council (GWEC). But the integration challenges posed by the intermittency of this resource shouldn’t be underestimated. In 2011, for example, almost one sixth of electricity generated from wind in Germany took place in just one month — December — with severe consequences for bordering countries with which it has grid interconnections, like the Czech Republic.

A twisted web of challenges is involved in integrating intermittent sources of energy like wind into a national grid. Liberalisation measures aimed at increasing supply-side market competition, market efficiency and, ultimately, consumer welfare don’t always have the intended consequences, while electricity — difficult to either store or direct — doggedly follows its own path of least resistance.

Miroslav Vrba, who is responsible for Grid Operation Control and ICT for CEPS, a.s., the Czech Republic TSO, says CEPS’s special situation is a ‘unique position’. ‘We have a strong grid and very strong connections with all neighbouring countries, particularly with Slovakia for instance, since the grid was developed as one system,’ he says. ‘The dark side of the same coin is that the strong grid allows more flow than a weaker grid. As wind-production capacity in the Baltic area has regularly increased over the past 3-4 years we’ve seen several instances of overloading.’ 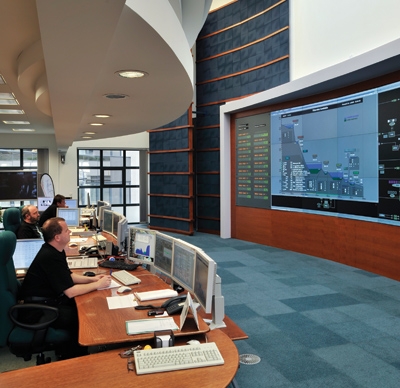 CEPS is in a ‘unique position’ (Source: CEPS)

This January, CEPS published a statement describing a critical situation in the Czech transmission system between 25 November and 16 December 2011 stemming from increased unscheduled power flows of up to 3500 MW (the usual value is about 1000 MW). Apart from increased output from northern Germany on windy days, other contributing factors identified by CEPS were: the shutdown of eight nuclear power plants in Germany; an increase in installed German PV capacity; increased electricity imports in the Balkan countries due to water deficit at hydro power plants; and intensive electricity trading, especially on spot markets.

How the Market Works

Wind forecasts have been observed for years to have a strong impact on German spot-market prices for wholesale electricity, especially when domestic demand is low. Trading occurs either bilaterally (‘Over-The-Counter’) or through EPEX spot markets organised by the European Energy Exchange (day-ahead for Germany and Austria; intraday for Germany).

A study by Marco Nicolosi at the University of Cologne’s Institute of Energy Economics found that in times of high wind infeed and low demand, the day-ahead market reacts with bids underneath variable costs to avoid ramping-down base-load power plants (nuclear, lignite, hardcoal and gas), which are expensive to shutdown and restart. After September 2008, when EPEX allowed negative prices on spot markets, this phenomenon resulted in about 70 hours of negative prices in 2009.

In 2009, wind power wasn’t directly traded on the spot market but sharp price fluctuations were observed based on large predicted wind feed-in to the grid, particularly in low demand periods. Until 2010, renewable power was purchased from producers at fixed FiTs by German TSOs, which traded daily on the spot markets to balance scheduled against actual renewable energy production.

However, since 2010 TSOs have been required to sell the total quantity of power they have to purchase from renewable energy producers (based on the previous day’s predicted feed-in) directly on the exchange’s day-ahead auction. For any differences between volumes already sold via the auction and the feed-in based on the intraday forecast, TSOs will be required to balance them via the exchange’s intraday market. When the market is saturated (highly negative prices occur when energy is brought to market by the TSOs), the escalation steps followed after intraday trading are bilateral contracts to decrease generation or increase the load (demand) and, finally, bilateral contracts for the decrease of renewable generation. When network stability is endangered, the TSO applies non-costly and costly measures according to an escalation principle, but decreasing renewable generation is a measure of last resort and extremely expensive, as generators must be financially reimbursed.

The 2011 trading volume in the day-ahead auction for Germany and Austria on EPEX SPOT accounted for 224 TWh (205 TWh in 2010), partly due to TSOs’ obligation to market RES power on the spot exchange. With an obligation to ensure priority dispatch and integration from RES and simultaneously act as a market player, the TSOs must continuously perform a delicate balancing act.

But one of the few countries that can quickly take advantage of high wind feed-in is Austria. It is commercially linked to Germany as the two countries form one unified bidding zone on the day-ahead EPEX spot market. Verbund AG, the largest power transporter in Austria and operator of the Austrian Power Grid, bills itself as ‘Europe’s Green Battery’, using pumped storage to buy ‘cheap’ electricity stored in Alpine reservoirs and later released during peak demand hours.

Herein lies the problem. While Germany and Austria are commercially connected as a unified bidding zone, the physical capacity to transport electricity from Germany to Austria and even within Germany itself is highly constrained. Genoese says the production of wind energy is concentrated in some northern and eastern regions of Germany but the highest demand is in the southern and western parts of the country.

The reason for Vrba’s concern is that stress on the system is increasing from 1-2 days a year to 1-2 weeks. On 3 December 2011 the yellow cross light in the Real Time Awareness and Alarming System had to be switched on due to violation of the ‘N-1’ security criterion. Cross-border capacities were reduced both by CEPS and the German side in the 50Hertz transmission area, but impact on physical cross-border flows was limited. Intraday trading sessions had to be stopped both in the export and import directions and all remedial actions available were exhausted.

This March, CEPS, with the TSOs for Hungary, Slovakia and Poland, published a joint report describing the impact of unplanned power flows due to differences between commercial inter-area transactions and the physical inter-area power flows. Unplanned power flows, it states, don’t result from cross-border trade mechanisms but from exchanges between northern and southern Germany, and between Germany and Austria. ‘Both the current way of allocating cross-border capacity and inappropriate definition of bidding zones cause a situation where these flows are “unplanned” and unknown for affected TSOs. Moreover, there is no mechanism to ensure that they respect transmission constraints in the neighbouring power systems.

As a result, TSOs are unable to correctly assess the expected real-time utilisation of their network after the market closure on D-1, which puts the transmission grid at risk,’ it states. A 2010 European Wind Integration Study with ‘snapshots’ for 2015 suggests the problem is only intensifying. So-called ‘loop flows’, or the difference between physical flows and market exchanges, are higher than studies had anticipated or planned reinforcements can accommodate, and significantly above those expected to result from market transactions. Such unmitigated large flows could cause cascade failures, while on the German-Czech border, ‘flows could exceed line capacities, even with all circuits in service, risking network failure without an initiating fault event.’

‘We’re very close to the risk of such failures,’ says Vrba. ‘Germany exhausted all possibilities, including shutdown or reduced production from conventional generation, and even pumping to create some artificial consumption.’ Vrba sees the obvious step as increasing German grid capacity from north to south but warns that the ‘NIMBY’ problem cannot be underestimated. Genoese agrees and points to public resistance involving many court decisions that have obstructed the extension of the north-south grid. In a public hearing for a new 380 kV line the TSO TenneT stated it had accumulated almost 4860 kg of paper in regulatory documents.

Since 1 January 2012 an amendment to Germany’s Renewable Energy Sources Act allows installation operators to claim a market premium from the TSO for electricity generated from RES or mine gas, which they sell directly and which has been fed into the grid and bought by a third party. Each month, producers can choose between the FiT or this direct marketing option. The market premium is the difference between the FiT and the market price, minus a management fee to cover transaction, trading and forecast error costs. In 2012 the fee is 1.2 &€ cent/kWh but will be reduced to 0.7 &€ cent/kWh by 2015.

Genoese sees this new market-premium option as a step in the right direction towards maintaining FiTs while improving market integration, but feels it is too early to draw any definitive conclusions.

Among the German TSOs, 50Hertz has the highest share of electricity produced by RES. With 40 percent of Germany’s installed wind capacity in its transmission zone it’s an export region for wind energy, with about 20 percent of its electricity produced from renewables, adding to the variability it must manage. Without the possibility of direct transmission, the electricity goes from the northeast to the southwest via Poland and the Czech Republic to Bavaria. In 50Hertz’s transmission region, about 60 percent of the wind producers have chosen the direct-marketing option. Whether or not this policy will function effectively as a congestion-solution mechanism is yet be seen, and Kamm says it’s an expensive option.

A final regulatory solution — albeit a contentious one — is zonal pricing, or splitting an electricity bidding zone into two or more zones to reduce congestion by sending cost-reflective zonal price signals. From CEPS’s perspective, the weak interconnection between Germany and Austria that’s currently excluded from capacity allocation should be included in the congestion mechanism run by the Central Allocation Office in Munich, to implement a regional, coordinated congestion-management procedure in the Central Eastern Europe region. For Vrba this would bring the bidding zone into compliance with the physical export capacity. Splitting zones cannot directly solve the problem of loop flows but can provide investor incentives for new capacity to relieve congestion.

Bundesnetzagentur, the German grid regulator, stated last October that splitting the zone would ‘damage competition’. The four eastern European operators believe the regulator has systematically underestimated the impact of unplanned power flows on their system and view the splitting of the zone as a ‘necessary precondition for solving the issue of unplanned power flows’. Which way will the wind blow now?