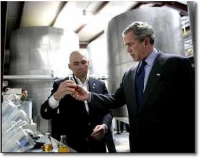 West Point, Virginia [RenewableEnergyAccess.com] Biodiesel just received one of its biggest plugs yet with a recent visit from President George W. Bush to a biodiesel plant near Richmond, Virginia. The occasion also marked a historic moment in the biodiesel industry. This is the first time any president has visited a biodiesel plant.

Speaking to a crowd gathered at Virginia Biodiesel Refinery, LLC, a biodiesel plant that began operating in March of 2004, President Bush called biodiesel “one of our nation’s most promising alternative fuel sources” and discussed the importance of a comprehensive energy plan to wean the United States from foreign petroleum. The President said high petroleum prices highlight how consumers and lawmakers need to look towards domestic energy sources, and he pressed Congress to pass a comprehensive Energy Bill. “Biodiesel is one of our nation’s most promising alternative fuel sources, and by developing biodiesel you’re making this country less dependent on foreign oil,” Bush said. “The high prices we pay today have been decades in the making. For the sake of the American consumers it is time to confront our problems now and not pass them on to future congresses and future generations.” Representatives of the National Biodiesel Board (NBB), American Soybean Association (ASA) and United Soybean Board attended, along with hundreds of other industry leaders, Virginia farmers, government representatives and others. “President Bush has shown that he believes in biodiesel, and that he wants it to succeed,” said Darryl Brinkmann, Chairman of NBB and a soybean producer from Carlyle, Ill. “We look to him now to do everything he can to encourage the extension of the federal biodiesel tax incentive and passage of the renewable fuels standard. That policy is needed to help this industry grow and put a significant dent in our imported barrels of petroleum.” The President’s plant visit comes as U.S. oil consumption and imports continue to rise. According to the Energy Information Administration (EIA), the United States spends almost $200,000 a minute on foreign oil. The U.S. uses approximately 20 million barrels of oil a day, more than half of which is imported. By 2025, demand is expected to rise to 27.9 million barrels a day – about 68 percent of which will be imported. Annual biodiesel production has increased from 500,000 gallons in 1999 to 30 million gallons in 2004, making it the fastest growing alternative fuel in America. Approximately 500 major fleets use the fuel nationwide. The biodiesel tax incentive that went into effect January 1, 2005 is helping biodiesel demand to climb even more. “The biodiesel incentive has been hugely successful in creating demand during the last few months,” said Brinkmann. “Extending that incentive beyond its two year period is the top priority of the biodiesel industry. We also look to Congress to pass legislation that will create a renewable fuels standard of eight billion gallons a year.” The United States House of Representatives has passed an Energy Bill that establishes an RFS that would grow to five billion gallons by 2012. The U.S. Senate is expected to act soon and pass an Energy Bill with an eight billion gallon RFS. The biodiesel and soybean industries are hopeful that the Senate bill will include an extension of the biodiesel tax incentive. “I appreciate the folks here at Virginia Biodiesel for showing me around,” Bush said. “I love the innovative spirit of our entrepreneurs in this country. And the folks here have got incredible vision, and they’re willing to take risks to innovate. What I think is interesting is that they have combined farming and modern science, and by doing so you’re using one of the world’s oldest industries to power some of the world’s newest technology.”