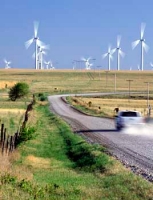 “With Twin Buttes and other new projects announced, as well as turbines secured and a strong development pipeline for the future,” said Terry Hudgens, CEO of PPM Energy, “PPM has increased our goal by over 50 percent to develop or control at least 3,500 MW of new wind power by 2010.” Twin Buttes will use 50 GE 1.5-MW turbines. Power generated by the Twin Buttes project will be delivered under a long-term contract to Colorado customers of Xcel Energy. While the project spans approximately 9,000 acres owned by seven landowners, the actual footprint of the turbines uses less than two percent of the total acreage. The remainder continues to be used for ranching and grazing. Construction is scheduled for completion by the end of 2007. “The Twin Buttes project will be an integral part of our efforts to meet Colorado’s Least-Cost (Resource) Plan (LCP) and our voter-approved Renewable Energy Standard (RES),” said Karen Hyde, Xcel Energy director for purchased power. “PPM Energy’s project also increases the utilization of a highly desirable wind power region of our state, and we will be able to take advantage of existing transmission resources to deliver this clean wind energy to our customers.” In Oregon, the Leaning Juniper Wind Project will use 67 1.5-MW GE turbines and PPM Energy is in advanced discussions with a customer for its entire output. Located in Gilliam County, approximately 25 miles from PPM’s existing Klondike Wind Power Plant, Leaning Juniper’s 100 MW is expected to provide clean, renewable electricity to more than 30,000 homes, according to the American Wind Energy Association’s calculation. The Leaning Juniper project will support the local economy with property tax payments and create up to 120 jobs, half of them local. The project is purchasing about $1.6 million in local construction materials, such as gravel and concrete, and creating $350,000 of demand for local services, such as food and lodging. PPM Energy staff also worked to minimize Leaning Juniper’s impact on local wildlife. The project spans approximately 5,000 acres of buffer lands adjacent to the Arlington landfill, which is operated by Waste Management. However, the actual footprint of the turbines and associated facilities uses less than two percent of the total acreage. Landowners will continue using the remaining land for wheat farming and grazing. “Waste Management has enjoyed the opportunity to work with PPM Energy for the past three years to bring this project into being,” said Cal Palmer, market area vice president for Waste Management. “Leaning Juniper also dovetails nicely with our landfill gas expansion project, which should produce additional electricity by 2007 and greatly reduces greenhouse gas emissions.”